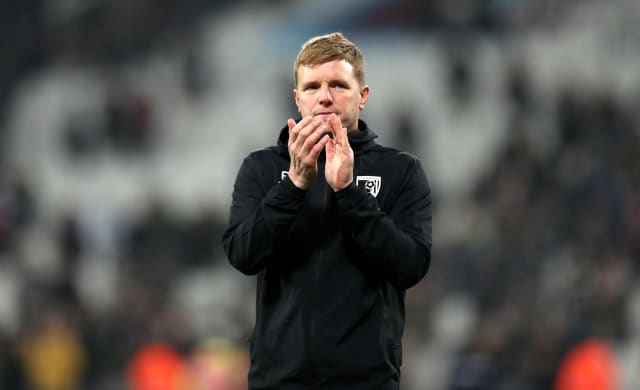 The victory was only Bournemouth’s third in 16 games in all competitions, but it was Solanke’s effort eight minutes from time which pleased Howe most.

The 22-year-old joined from Liverpool exactly a year ago but, despite featuring regularly for Cherries, he had yet to get off the mark – including having a first-half header against Luton disallowed.

“I’m delighted with the scoreline, performance and attitude of the players and the crowd. It’s been difficult for them, they really stuck with us so I’d like to thank them.

“For all the goalscorers I’m pleased. I’m very pleased with Dominic.

“Performance-wise I think he’s been very good since he signed for us, he just hasn’t had the confirmation of those performances with the goals.

“He needed that I think, the first one being disallowed would have been really hard on him, it was a great header from his perspective and I think harshly ruled out but he kept going.

“I was really pleased to see that one drop to him, that lucky bounce he hasn’t had since he’s been here.”

Billing opened the scoring after only eight minutes. Diego Rico floated the ball in from the left and the unmarked Billing volleyed into the net.

Solanke thought he had doubled Bournemouth’s lead only for his header to be disallowed by VAR because team-mate Harry Wilson was offside.

Alan Sheehan blew the chance to get Luton back into the tie when he fired a penalty against the crossbar moments before half-time.

Wilson made it 2-0 almost immediately after coming on in the 66th minute when he was teed up by namesake Harry, and Billing added a third with a deflected long-range shot.

Solanke then crowned the victory eight minutes from time by smuggling the ball home from 12 yards for his first goal in Bournemouth colours.

Jones said: “Obviously we knew Bournemouth want possession of the ball and it’s very difficult to take a Premier League side on in that area.

“We set up for the counter-attack and we had a great chance with Harry.

“You need to score that but we got a second bite of the cherry with the penalty but his standing foot goes and we don’t score.

“I think that was the key moment in the game if we wanted to win it.”