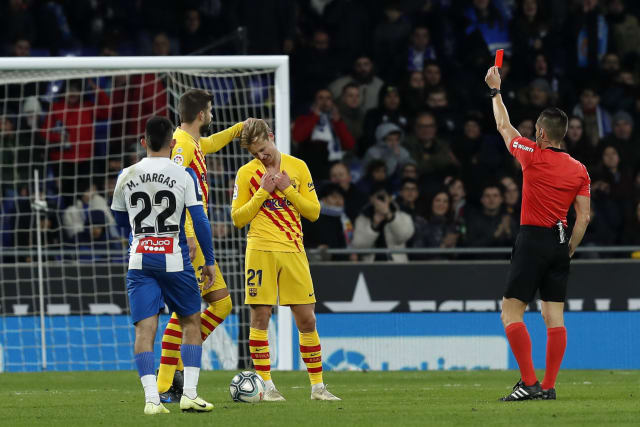 Espanyol were dreaming of a first derby win since February 2009 when David Lopez put them in front midway through the first half.

At that point it looked as if Barcelona would restore their two-point lead at the top of LaLiga after Real Madrid’s 3-0 win at Getafe earlier in the day.

But De Jong saw red for two bookable offences and China striker Wu broke through to arrow a low shot into the corner of the net.

Espanyol, with just two league wins all season and none at home, were under the command of Abelardo for the first time.

Abelardo was Espanyol’s third head coach of the season after David Gallego and Pablo Machin and the former Barcelona player had clearly worked on making them a compact unit.

Barcelona had nearly 90 per cent possession in the opening quarter, but Lionel Messi and company were constantly met by a wall of blue and white-shirted defenders.

And Espanyol took the lead from their first meaningful foray forward after 23 minutes.

De Jong stupidly barged into Lopez for Marc Roca to exhibit his ability from deadball situations.

Lopez met the free-kick with a wonderful glancing header, which flew into the net and survived a VAR check with Suarez just about playing the Espanyol midfielder onside.

Although not at fault for the goal, it was an inauspicious start for league debutant Neto – the first Brazilian to play in goal for Barcelona in LaLiga.

Messi responded with a weak shot easily gathered by Espanyol goalkeeper Diego Lopez, but it was not until the closing stages of the first period that Barcelona menaced.

Sergio Roberto found Messi, arriving at speed at the far post, but his header flew straight at Lopez.

Moments later, Suarez found some space on edge of the penalty area to toe poke the ball against a post.

Vidal replaced Ivan Rakitic at half-time as Barcelona boss Ernesto Valverde sought to increase the intensity and the visitors were level within five minutes of the restart.

Jordi Alba picked out the run of Suarez and the Uruguayan beat Lopez at the near post to register his 11th league goal of the season.

Suarez had to receive treatment after being caught on the knee by Bernardo Espinosa.

But he soon produced a peach of a cross with the outside of his right foot for Vidal to score with a powerful header, although Lopez did get a hand to it.

Suarez almost added another after a mazy Messi dribble, but Barcelona were left a man short when De Jong pulled the shirt of Jonathan Calleri and  received a second yellow card.

Espanyol made their numerical advantage count when Wu, denied just moments earlier by Neto, raced through to level.

There was even time for Calleri to pass up the chance of a dramatic winner, but Espanyol fans celebrated at the final whistle even if they remain three points adrift at the bottom.