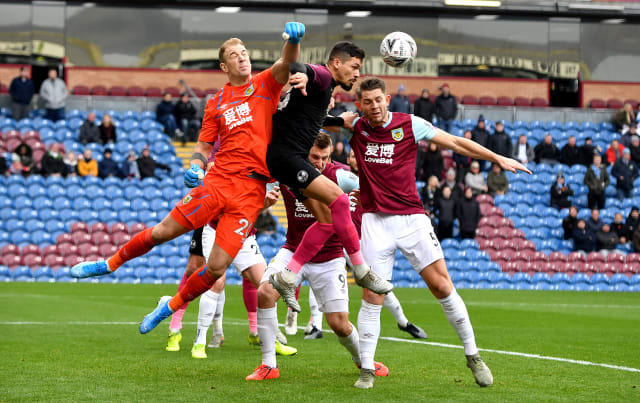 Sean Dyche indicated that Burnley will not allow Joe Hart to leave during the January transfer window should any offers be made.

There has been speculation that Aston Villa could move for Hart following the season-ending injury suffered by Tom Heaton in their victory at Turf Moor on Wednesday.

Heaton left Burnley for Villa in the summer but Dyche said it was “highly unlikely” that any of his senior players will be departing this month.

Hart is a clear number two to Nick Pope and made just his second appearance since December 2018 in Saturday’s 4-2 victory over Peterborough in the third round of the FA Cup.

Dyche praised Hart’s performance and, asked if the 32-year-old is frustrated, said: “He seems all right to me. He performed like he wasn’t frustrated today, he performed with a clear-mindedness. Very good pro, he’s good around the group.”

Dyche made eight changes, giving fringe players a chance and freshening up his line-up after three Premier League defeats in a row.

He was rewarded with a flying start, Burnley going 3-0 up inside 25 minutes through Jay Rodriguez, Erik Pieters and Jeff Hendrick.

Ivan Toney exploited a mistake from Matt Lowton to score his 17th goal of the season before half-time but Rodriguez’s second effectively killed the contest, although young substitute Ricky-Jade Jones did grab a second for Posh.

“We spoke in the week about the mentality going into this game and I thought it was on show, and some very good performances in a tricky tie.

“And it was a very confident performance, which I was pleased about, because obviously we’ve had a couple of tough results lately. There’s a difference in level, we know that, but what it does is it makes sure players are sharp.”

The negative was another hamstring injury for Johann Berg Gudmundsson, who was forced off at half-time. The Icelander was making his first start since suffering a bad hamstring strain in October.

Dyche said: “That’s the unfortunate side. We’re just waiting to find out the detail. We were just getting people fit before Christmas and then we get injuries again, and that does test you.”

Both managers had grumbles about the officiating. Posh boss Darren Ferguson argued that Pieters’ goal should have been disallowed because Rodriguez was in front of the keeper in an offside position, while Dyche felt James Tarkowski was fouled in the build-up to Jones’ goal.

“He gets two hands in the back and I don’t know where that lives,” said Dyche. “If he flies to the floor, they probably give it, and, because he tries to stand his ground, he doesn’t get it. This is one of my many annoyances about football at the minute. You try and be strong and play the right way, you get nothing.”

Peterborough are pushing for promotion from League One but had lost three games over the festive period and their poor start killed off hopes of an upset.

Ferguson said: “To go 3-0 down after 25 minutes in any game of football, but to do it against a Premier League team makes it a very, very difficult afternoon.

“At that point you’re looking at it and thinking, ‘this could be a hell of a long afternoon’. But, credit to my players, they kept going. The goal that Ivan scored gave us a little bit of hope going into half-time.

“You don’t mind conceding goals like the fourth one, which is real Premier League quality, but the first goal and the third goal are far too soft.”