Broad and Anderson help England bite back before lunch 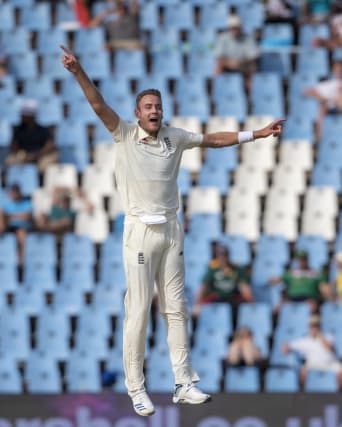 England hit back with the ball on day two of the second Test against South Africa with Stuart Broad and James Anderson at the fore.

The tourists added just seven runs to finish 269 all out in the morning after Anderson was dismissed by Kagiso Rabada and Ollie Pope was left stranded on an unbeaten 61.

That looked well short of a competitive total until England’s two most prolific wicket-takers combined to drag their side back into the game as the Proteas reached 60 for three at lunch.

Broad tightened up immediately, easing into a six-over spell that yielded two for 12 and four maidens.

Malan and Zubayr Hamza both fell for five, fiddling outside off stump as Broad hammered a testing channel and edging to slip.

Ben Stokes did brilliantly to get his handers under a low chance to see off Hamza, and took a second in the cordon when Anderson drew a nick from home captain Faf Du Plessis.

A fourth wicket would have made it a superb session for the English attack and it almost came when Rassie Van Der Dussen sprayed Anderson into the gap between second slip and gully.

Anderson also had Van der Dussen given lbw for six, but a big inside edge showed up on review.

Dean Elgar, who was responsible for 35 of the team’s lunch total, had one risky moment when he lifted spinner Dom Bess’ first delivery in the vicinity of short cover, but Pope could not hang on.