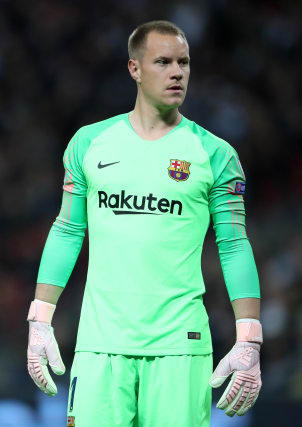 Barcelona head coach Ernesto Valverde is set to take Marc-Andre Ter Stegen out of the firing line after revealing his goalkeeper has been playing despite a knee injury.

Ter Stegen is expected to miss the derby clash at Espanyol on Saturday and next week’s Supercopa de Espana against Atletico Madrid in Saudi Arabia due to a tendon problem.

Valverde said at his pre-match press conference on Friday that the Germany international has been struggling for some time with the issue.

“He’s had some tendon problems for a while and at one point we considered he could be out for a little while. That moment is now,” said Valverde.

“He won’t be available tomorrow and we think it’ll be difficult for the Supercopa.”

Asked if Ter Stegen would need an operation, Valverde replied: “I don’t know. We haven’t talked about that. Our idea is that these discomforts go away with time.”

Neto will replace Ter Stegen in goal while Valverde hopes to have Lionel Messi and Luis Suarez fit to face Espanyol, with the forwards having only returned to training after the La Liga break on Thursday.

“Luis, like Leo, came back OK and we’ll see how they are (in training). Based on that, we’ll decide for tomorrow,” he said.

Barcelona head across the city to the RCDE Stadium top of the table with a two-point lead over rivals Real Madrid, while Espanyol are languishing at the bottom of the standings and five points from safety.

However, Valverde thinks that league positions will count for little. He said: “We have looked a little at what Espanyol has done in recent games.

“They are in a complicated situation (at the bottom of La Liga). It is a derby, there will be a lot of tension in the game. You play with your heart and you have to know how to play these types of matches.”

Former Barcelona defender Abelardo will take charge of Espanyol for the first time against his old club, having replaced Pablo Machin as head coach.

Asked if he had thought much about the scenario, he said as reported by AS: “I dream sometimes but I am very calm in the difficulty of the challenge.

“We must improve but tomorrow is a very motivating game because it is a derby and is the typical game in which the player does not need motivation.

“Winning would be impressive, it would be an incredible injection. But I would settle for playing badly and winning. Right now we need results.”