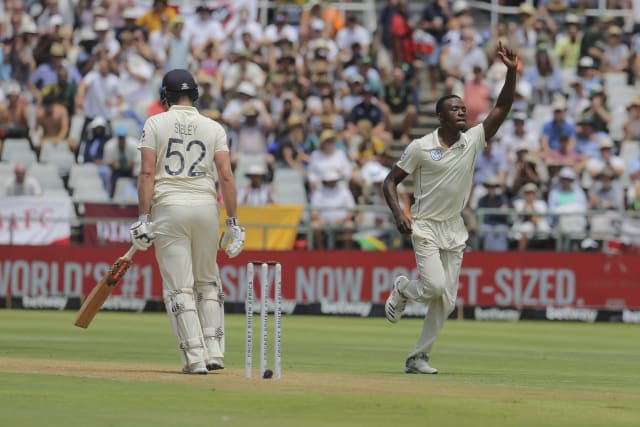 England reached 67 for two by lunch on day one of the second Test against South Africa as they attempted to reset the tone of the tour in Cape Town.

With opener Rory Burns due to fly home having injured ankle ligaments playing football on the eve of the game and key paceman Jofra Archer absent with an elbow problem, problems were mounting up for a side who lost by 107 runs in the series opener.

Captain Joe Root had some much-needed good luck when winning the toss but, having opted to bat first, saw Burns’ stand-in Zak Crawley nick Vernon Philander behind in the third over of the day.

The thousands of travelling fans packed into the picturesque Newlands ground must have been braced for the worst but Dom Sibley (34) and Joe Denly (21 not out) battled to a 55-run stand before Kagiso Rabada removed the former late in the session.

The calibre of the bowling was consistently high from the Proteas’ new-ball pairing and an inexperienced top order did their best to find a foothold in the game, while never getting ahead of the game. Crawley, chosen ahead of the more experienced Jonny Bairstow, was simply outclassed by the outstanding Philander.

Much now will depend on Root, whose third ball from Rabada jagged in sharply and hit him in the chest. He got off the mark with a four to third man, his only pre-lunch runs.

The England and Wales Cricket Board confirmed just before the toss that Archer was ruled out, no surprise given he had barely bowled over the past 48 hours, but also revealed he had been sent for a second scan.

That indicates they do not yet know the full extent of the injury and are seeking clarity.

England played a brief game of ‘head tennis’ with a football ahead of play but their usual warm-up match was abandoned, with an ECB spokesman later confirming that the players’ favourite past-time had been shelved until further notice following discussions between head coach Chris Silverwood and director of cricket Ashley Giles.