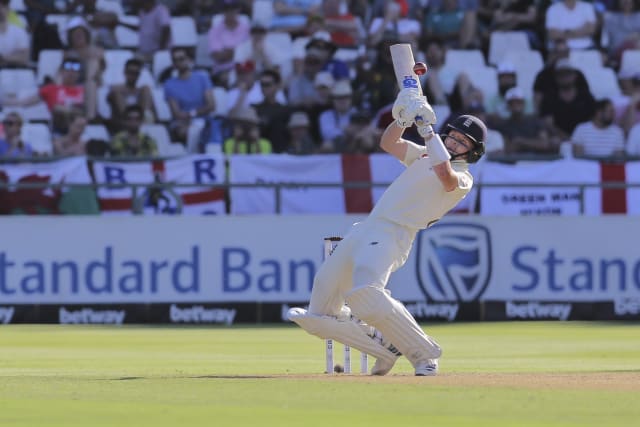 Ollie Pope accepts England let a chance slip through their fingers on the first day of the second Test against South Africa, with Ben Stokes’ tame dismissal the catalyst.

England chose to bat first on a decent surface as they set out in pursuit of a series-levelling win in Cape Town, but reached stumps on a modest of 262 for nine.

Pope was the unbeaten top-scorer on 56 not out and the tourists were never better positioned than when he and Stokes took the score to 184 for four with a handy partnership of 58.

Stokes, who struck a career-best 258 on his last Test appearance at Newlands, was well set on 47 when an uncharacteristically reticent drive picked out Dean Elgar at cover.

“I’m sure Stokesy is pretty frustrated as well. He’ll be as annoyed as anyone I’m sure. He was playing the aggressor role and I was just getting into my innings and finding my way, so it was a shame.”

England’s problems were not entirely of their own making, with the Proteas’ five-man attack complementing each other expertly once again, but there will be considerable frustration that so many batsmen gave away solid starts.

Among the top seven, only rookie opener Zak Crawley fell cheaply, expertly unpicked by Vernon Philander for four in just his second international innings. All of the rest made at least 29, with only Pope reaching a half-century.

“When you get out in the 30s you’ve done the hard work. The hardest bit of batting is getting there,” said Pope.

“When you get out at 30 it’s the most frustrating thing but whether that was the wicket or the way we played we’ll find out tomorrow. It’s a good wicket but there’s definitely a little bit in it for the seamers, even with the old ball. Hopefully we can expose whatever there is in there.”

South Africa all-rounder Dwaine Pretorius, who played his supporting role to a tee by having Jos Buttler caught behind and bowling Sam Curran as he offered no stroke, had a different take.

Assessing England’s efforts with the bat, he said: “At least 350 would be a par score. They’re at least 70 runs short on a wicket like that.

“I think a lot of their guys got in and got out at the wrong times, in the 30s. It was a really good day for us, so we’ll run with that. We’re coming back tomorrow and we’d like to finish it up quite early.”

Pope will resume his knock on day two, looking to push England’s score as far as possible and perhaps even nudge up to towards his Test best of 75.

In order to do that, he must first rely on some resolve from number 11 James Anderson.

“Jimmy’s on strike so hopefully he can get through the first ball!” he said with a smile.

“Hopefully he can nick a single or get through the over and then we’ll try and do the same as we did tonight. If we can get another 30 runs that’d be great.”