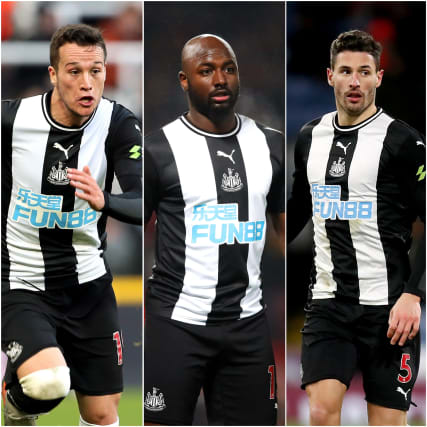 Newcastle head coach Steve Bruce has once again hit out at a “ridiculous” festive schedule after seeing his squad torn apart by injuries.

The Magpies will head for League One side Rochdale in the FA Cup on Saturday without five of their six central defenders – Jamaal Lascelles, Ciaran Clark, Paul Dummett, Fabian Schar and Florian Lejeune – wing-backs Jetro Willems and Javier Manquillo, midfielder Jonjo Shelvey and striker Allan Saint-Maximin.

Willems, Manquillo, Shelvey and Schar all limped out of the New Year’s Day clash with Leicester in a catastrophic few minutes either side of half-time, while Lejeune is unavailable after playing four games in 12 days over the holiday period on his return from a second knee ligament injury to leave the club counting the cost of a packed fixture list.

Asked about the casualty toll at his pre-match press conference of Friday morning, Bruce said: “I was in at 6.45am with the doctor to find out. Look, it is what it is. I’ve never known a 15-minutes like it.

“I did predict a month ago that the schedule was ridiculous and we don’t have the resources to have huge rotation, so unfortunately when you keep asking players to play tired…

“Up until Saturday, our record for this season was far better than last year in terms of injuries, especially soft tissue injuries.

“Matt Ritchie and Lascelles in particular were impacts – there’s not much you can do about that, and the one thing you want to be doing with the sports science that we have today is the prevention of injuries and especially soft tissue injuries.

“For me, it’s just the number of games in a short period of time and asking footballers to play tired, and unfortunately we’ve picked up the consequences of it, so it is what it is. We have to accept it and move on.”

It might have been worse for Bruce, who feared wing-back DeAndre Yedlin had broken his hand against the Foxes despite playing on, although X-rays have since confirmed there is no fracture.

Newcastle figure at the top of a Premier League injury table covering the four Christmas and New Year fixtures.

By contrast, new Everton boss Carlo Ancelotti was thrilled to come through that run of games with his squad relatively unscathed.

He said: “The schedule is so intense, we know this. We are used to playing every three days, so the news is that they have to play every two days and it is more difficult from this aspect.

“Of course we have some injuries, like (Jean-Philippe) Gbamin and Andre Gomes, who could help us to be better, but in general the physical condition is really good and the fact we didn’t have muscular injuries in these games is really good.”