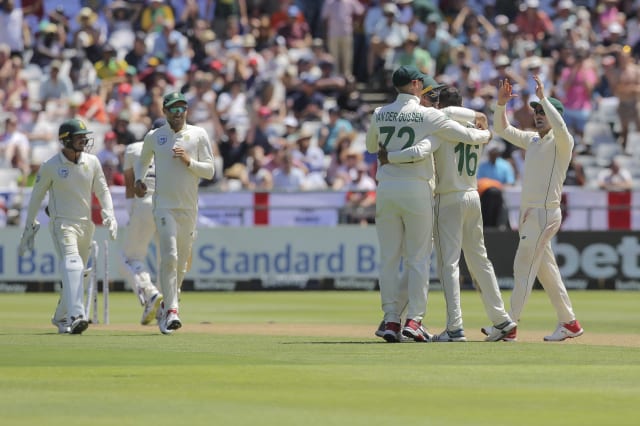 England’s batsmen were fighting for a foothold on day one of the second Test in Cape Town, with Ben Stokes and Ollie Pope at the crease on 149 for four at tea.

After a difficult 24 hours which had seen opener Rory Burns ruled out for the series with ankle-ligament damage and key paceman Jofra Archer miss out with an elbow injury, the tourists were desperately hoping to start in the ascendancy at Newlands.

Captain Joe Root finally had some luck when he won the toss, but South Africa’s well-drilled bowling attack once again proved to be unforgiving opponents.

Burns’ replacement Zak Crawley managed just four before nicking the enduringly classy Vernon Philander, while Dom Sibley made 34 before being caught behind off Kagiso Rabada in the run-up to lunch.

England reached lunch on 67 for two, avoiding any worries of an early collapse but never shaping to assert themselves. The game was up for grabs in the afternoon and England lost two set batsmen, Joe Denly nicely bowled by Keshav Maharaj for 38 and Root gloving a brutish delivery from Anrich Nortje on 35.

Root had looked to advance the game after lunch, easing himself into the battle with a couple of cleanly-hit boundaries that whistled through backward point and quickly overtaking Denly.

The Kent man was scrapping hard and went 48 deliveries without scoring while marooned on 21. When the dam finally broke it was stylishly done, with a firm drive disappearing through cover for four.

There was a hint that Root’s exuberance was beginning to get the better of him when he reached for a slog-sweep against Maharaj only for his mis-controlled top-edge to land safely.

At the other end Nortje was working up a head of steam and cracked Denly on the back of the head.

By the third over of his spell he was ready to leave his mark on the scorecard, finding Root’s edge with a fuller ball shaping away outside off.

Rassie van der Dussen had a relatively straightforward task at first slip but parried a head-height chance for four. South Africa looked aghast at sparing the England skipper but Nortje ensured they need not worry, charging back in two balls later and digging in a 90mph bouncer that seemed to follow Root as crouched and duck to avoid contact.

What he failed to do was withdraw the top hand, and the ball looped up to De Kock after thudding into his glove.

Maharaj ended Denly’s hard-working stay when he squeezed one through bat and pad, flicking the bails on its way through, leaving England 127 for four.

Stokes, returning to the site of his career-best 258 four years ago, was in positive mood, picking up four boundaries on the way to 28 not out at tea.