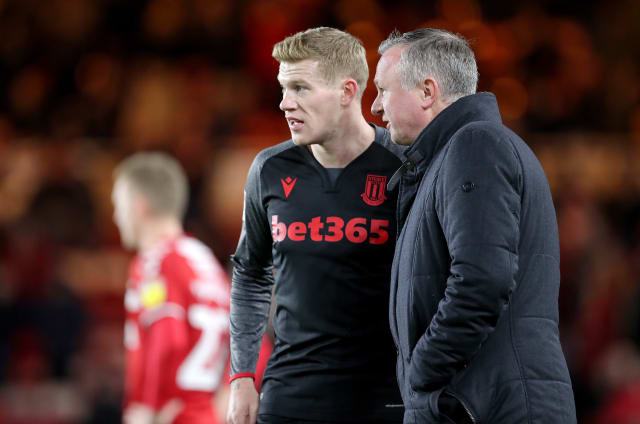 Barnsley have been charged by the Football Association in connection with allegations of sectarian abuse aimed at Stoke midfielder James McClean.

The charge relates to chants heard during the Sky Bet Championship clash between the sides at Oakwell on November 9, which the Potters won 4-2, in the run-up to Remembrance Sunday.

An FA statement said: “Barnsley FC has been charged with a breach of FA Rule E20.

“It is alleged that the club failed to ensure its spectators, and all persons purporting to be its supporters or followers, conducted themselves in an orderly fashion and refrained from using abusive and/or insulting words which included a reference, whether express or implied, to nationality and/or religion and/or beliefs, while attending an EFL Championship fixture against Stoke City FC on Saturday 9 November 2019.

The news came just days after the FA launched an investigation into allegations of discriminatory chanting aimed at the 30-year-old Republic of Ireland international during the Potters’ 5-2 win at Huddersfield on New Year’s Day.

A tannoy announcement was made during the game at the John Smith’s Stadium to warn spectators about the use of inappropriate language.

Derry-born McClean has found himself in the firing line in recent seasons for his decision not to wear a poppy on his shirt in the game closest to Remembrance Sunday, out of respect for those who died in the city on Bloody Sunday in 1972.

Speaking on international duty in November last year about the regular abuse he receives, McClean revealed that he had been contacted by the FA before the trip to Barnsley and offered the association’s support.

He said: “To give them their fair dues, I got contacted by a member of the FA on Friday before the Barnsley game just offering support.

“I wasn’t expecting it, it was quite a shock, but in the same sense, credit where it’s due. He didn’t have to text me – he hasn’t for the last eight years – but credit where it’s due, he did to offer support, and they seem to be following up the chants from what happened on Saturday.

“Look, I’ve criticised them in the past, but I’m big enough as well to show and give credit where it’s due.”

Asked if he was tired of playing in England as a result of the hostility, the former Sunderland, Wigan and West Brom winger said: “No, not really. It doesn’t bother me. It probably affects my wife and my ma more, but that’s something I probably don’t take into consideration, how they feel.

“For me, I just get on with it. I think over the years, I’ve developed a kind of thick skin and it’s just water off a duck’s back for me when it happens.”