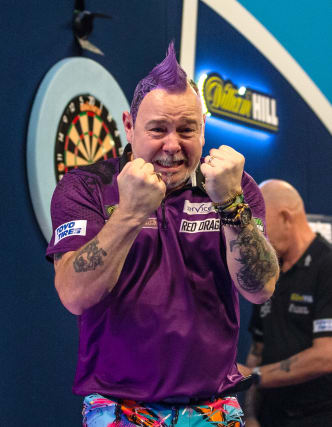 Peter Wright said he cannot wait for the first time he is introduced as darts’ new world champion.

The 49-year-old, beaten by Van Gerwen in the 2014 final and who had lost in 10 previous major televised finals, held back the tears after sealing his victory and said it had been a triumph for patience and perseverance.

When asked how he felt having slept on his career-changing victory, Wright told PDC Darts: “On top of the world. World champion! It’s got a good ring to it, hasn’t it?

“I can’t wait for the first place I go to when they announce me champion of the world. It’s going to be goose-bumps all over.

“I’ll have to try and keep the emotions in, for the first time. I’m really happy.”

Wright, based in Mendham, Suffolk, but who represents Scotland after being born in Livingston, could count the UK Open in 2017 as his only major title before holding his nerve against world number one Van Gerwen.

“Instead of people saying: ‘The crazy guy with the crazy hair, all he is is a runner-up, he’s only won the UK Open’, they can’t say that anymore, can they?” Wright said.

“I can’t wait for (PDC master of ceremonies) John McDonald to announce me as world champion. That’s going to be cool.”

Wright opened up a 2-0 advantage in the final and then halted a Van Gerwen fightback to lead 4-3 before cashing in on several of the Dutchman’s missed doubles to regain a healthy lead.

“I finally beat him,” Wright said. “I’ve finally beaten MVG and in the most important competition there is, the world championship. That was nice.

“It seemed like everyone had seen the hard work I’d gone through in years and years of trying to win titles and in the world championship.

“All the work (wife) Jo, her dad and the kids had put in back at home. I was doing it for them and we’ve finally done it.

“I was focused, not worrying what Michael was doing or worrying about the crowd or cameras, or anything.

“Let’s pretend it’s not the final and just another game I was playing. That’s what I had in my head.”