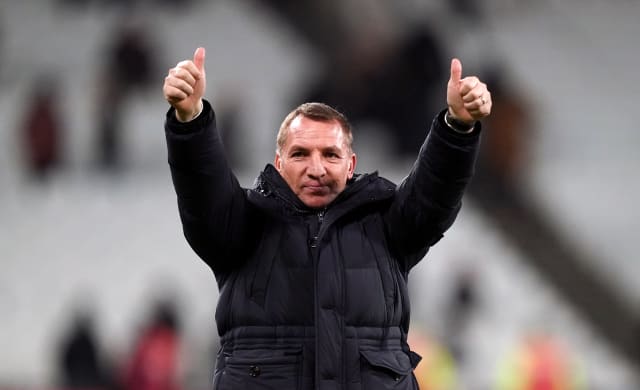 Leicester boss Brendan Rodgers was richly rewarded for the trust he placed in his players as they negotiated an energy-sapping festive programme.

The Foxes emerged from a gruelling schedule having responded to back-to-back defeats by Manchester City and Liverpool with victories at West Ham and Newcastle despite making wholesale changes.

Nine of the men who played in the 4-0 Boxing Day defeat by Liverpool were rested for Saturday’s trip to the London Stadium, and six of them returned at St James’ Park on New Year’s Day as a maximum six points were banked even without the services of injured striker Jamie Vardy.

Reflecting on the 3-0 win on Tyneside, Rodgers said: “Some of these players, you’re going to see if they flourish if you put them in.

“Whether it was scientific or psychological, it doesn’t really matter. It’s very, very difficult, to play like we were on a Thursday at 8pm and if our game is based around intensity and physicality, and then we play on a Saturday less than 48 hours later.

“You don’t need to be a rocket scientist to know that you’re not going to be able to have that input physically into the game, so you have to make the changes.

“But I trust the squad. I see them work every day, I see how hard they work, how professional they are and know that we could make that change, so I made the changes. It worked well and then we can come here and make a number of changes to keep the energy and maximum intensity in the team.

“The players have been brilliant over this holiday period.”

If Rodgers’ ability to rotate his squad proved key, opposite number Steve Bruce’s lack of options was a major factor in a contest in which his side was second best even before an implosion of epic proportions.

The Magpies made it to the 36th minute without conceding largely due to the excellence of keeper Martin Dubravka, but then folded as central defender Florian Lejeune, playing his fourth game in 12 days after returning from a second knee ligament injury, twice saw passes picked off deep inside his own half.

Former Newcastle striker Ayoze Perez opened the scoring from the first and James Maddison thumped home a second three minutes later. The game was effectively over within six minutes of the restart when, with Jetro Willems, Javier Manquillo and Jonjo Shelvey having already departed through injury, Fabian Schar followed to leave the Magpies down to 10 men.

Substitute Hamza Choudhury made it 3-0 at the end, but Bruce was left counting the cost of a bruising afternoon.

He said: “You never want to make three substitutions before half-time through injury. I don’t think in the 20 years I’ve been doing it, I’ve had to do it and of course, Schar goes down after a minute in the second half, so any chance we have in the game then has obviously disappeared.

“Two-nil down against Leicester with 10 men, it was a difficult afternoon all round.”