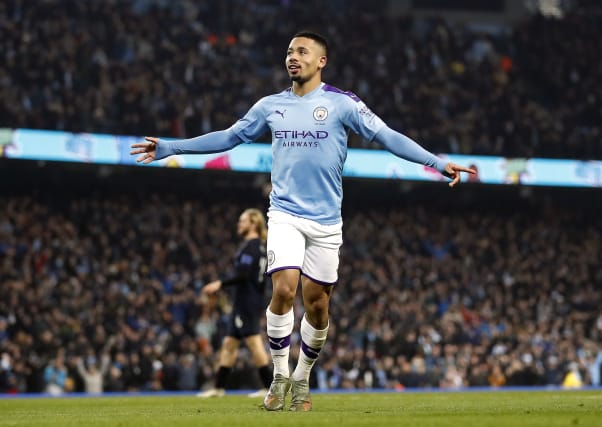 Jesus struck both goals at the Etihad Stadium on New Year’s Day as the Premier League champions claimed a hard-fought 2-1 win against Carlo Ancelotti’s new side.

The double took the 22-year-old’s tally for the season to 13, eight of which have now come in his last eight appearances.

Injuries and a lack of starts due to the brilliance of Sergio Aguero in the centre-forward’s position have hampered Jesus since his move to City in January 2017, but Guardiola is pleased with his output.

The City boss, who brought Jesus into the side among five changes, said: “He’s a young player but the way he defends and fights… of course he has to improve, he knows it, and we have spoken together about what he has to do, but I think every day he is better and better.

“What he has shown so far in the period he’s been here, he’s had ups and downs, but with his age and the injuries he’s had, he was excellent.

“Sergio is irreplaceable for what he means to our fans, what he’s done in this club, but every year is one season more for Sergio, and we have a lot of games, so we need good back-ups for all the players.

“Sergio has an excellent complement with Gabriel. They have an incredible relationship for strikers, which is good. In the last game Sergio helped us to win with a fantastic first goal and here it was Gabriel.”

Playing their third game in six days, City were not at their most exhilarating but they largely outplayed Everton.

A Phil Foden goal was disallowed for offside by VAR in the first half but Jesus’ double early in the second half put the hosts in command.

An error by goalkeeper Claudio Bravo, playing with Ederson out ill, allowed Richarlison to pull one back but City finished strongly and Jesus was denied a hat-trick by the post.

Jesus said: “I always try to give my best. I’m a striker, so I have to score goals. Sometimes it’s possible, sometimes not, now I’m very happy for having scored twice.

“When a striker scores he is always happy but I’m even more pleased with how well we played against a great team with amazing players.”

Guardiola may have already accepted City are unlikely to catch Liverpool this season but Jesus will not give up easily.

“We have to keep fighting until the end,” he said. “Of course it’s going to be difficult but we have to try.”

Everton’s defeat was their first in three games since Ancelotti took charge just before Christmas.

Tom Davies, who earned a late call-up to the side after Bernard was injured in the warm-up, has no doubt the team are in great hands.

He said: “We are going in the right direction. Even though we weren’t at our best the lads showed great spirit to keep going and not let the game get away from us.

“We are all looking forward to the rest of the season and trying to get on a run.

“We are looking good. We have to listen to him (Ancelotti) and improve and go on and win more games.”