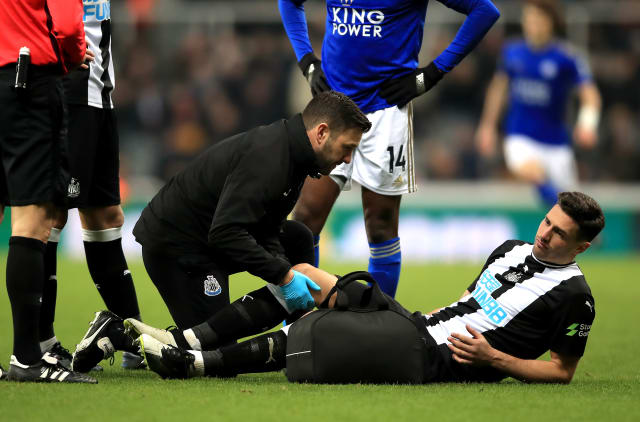 Managers have constantly lashed out at the fixture list with some clubs having less than two days between games.

It was the second time Manquillo had been injured having previously suffered a hamstring strain while Paul Dummett was already missing with a groin problem which forced him off in the 1-0 win over Crystal Palace on December 21.

“Asking players to play four games in 10 days is ludicrous and today is the consequence of that,” said Newcastle boss Steve Bruce after the loss to the Foxes.

“I was concerned about the number of games but we could have lost five players today. Three of them are hamstrings and one (Jetro Willems) is a groin, while DeAndre Yedlin has broken his hand, we think.

“I didn’t have the bodies to make changes as we had four or five out anyway.”

They were both due to have scans on Thursday and there are growing fears Wesley could miss the rest of the season.

Wolves and Burnley suffered no injuries with Nuno Espirito Santo’s side continuing their fine injury record, despite having now played 35 games after starting their season in July in the Europa League qualifiers.

The Portuguese labelled their fixtures as absurd after they had just 44.5 hours to recover from their stunning 3-2 win over Manchester City on December 27 before facing Liverpool, eventually losing 1-0.

“I’ve never seen (a situation like) playing games against tough teams with 45 hours between games,” said Nuno. “It’s going to be very tough. Of course, it goes against everything – it’s absurd. There’s no explanation.”

“I don’t have any confidence about that. They don’t care,” he said, when asked if he would like to see the Premier League change and look at player welfare.

Hamstring problems are the most common and account for 36 per cent of the 53 festive injuries in the Premier League.

Leicester made the most changes to their line-ups – 18 – three more than anyone else while Watford made the fewest changes on average.

New Nigel Pearson averaged just one per match with the struggling Hornets winning 10 points from the 12 available.