A short film narrated by the Duke of Cambridge will be played at the start of FA Cup matches in a "historic first" encouraging football fans to look after their mental health.

Kick-off for 32 third round matches will be delayed for 60 seconds to encourage fans to "Take A Minute" to consider their well-being.

The film, which features England stars including Jesse Lingard, Harry Maguire and Jordan Pickford, will be played in stadiums and broadcast to millions watching the games on TV.

It has been released as a collaboration between Public Health England's (PHE) Every Mind Matters and the Football Association and Heads Together's Heads Up campaign.

William, who is president of the FA, says in the film: "In life, as in football, we all go through highs and lows.

"We can all sometimes feel anxious or stressed. At moments even the little things can seem a struggle. But we can all start to change things.

"Every Mind Matters and Heads Up will show you the simple steps you can take to look after your mental health – helping to boost your mood, improve your sleep and feel ready for life's ups and downs." 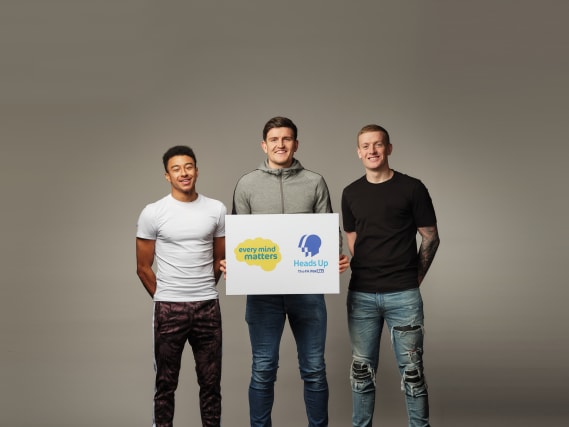 England's match against Italy at Wembley Stadium on Friday March 27 is believed to be the first England international fixture to spotlight mental health.

The duke said: "Over the course of the next five months, Heads Up will use one of the most powerful, unifying forces in our society – football – to spread the message that we all have mental health, just as we all have physical health.

"Our ambition is to start the largest ever conversation on mental health and to ensure there is a lasting mental health legacy for the game in this country.

"I hope Heads Up can help us all take another big step forward in shattering the stigma that surrounds mental health."

England manager Gareth Southgate said: "I know what an important role football can play in driving positive change in society so we're proud that our fixture against Italy at Wembley Stadium on Friday March 27 will be dedicated to the Heads Up campaign.

"Hopefully this will provide another platform to generate open and honest conversation about mental health and well-being."

The campaign is supported by a raft of footballing associations including the UK's four national governing bodies.

It comes as research commissioned by PHE of more than 3,300 adults in England found men are less likely than women to seek help or take self-care actions for early signs of common mental health concerns.

Of the 78% of men who have experienced early signs of mental health concerns in the last year, just under half (45%) said they had never taken self-care actions to manage their mental health, compared to 31% of women.

Duncan Selbie, chief executive of PHE, said: "As every fan knows, football has its highs and lows – and so does life.

"This is a fantastic opportunity to bring the football community together in an important conversation about how we can all take care of our mental health, starting with a few simple actions."

Health Secretary Matt Hancock said: "We all need to get the support to open up about mental ill health, take steps to keep our mental health strong and reach out for help when needed.

"We all need to look out for our mental health and take steps to prevent problems starting or escalating – just like with our physical health.

"This film is a great way to encourage us all to stop and take a minute to reflect on our mental health, helping to generate conversation and normalise mental health and give people more opportunity to speak up if they are struggling."