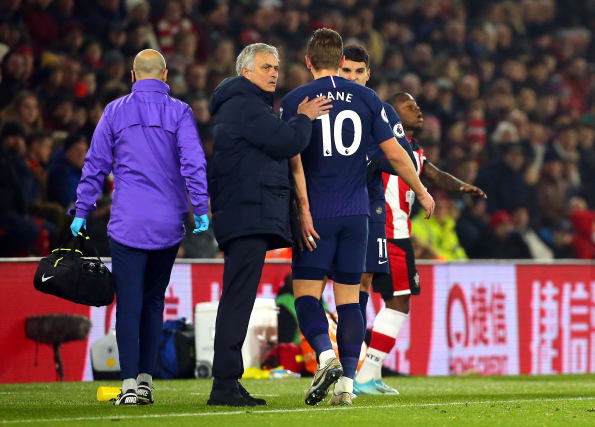 The Premier League’s usual hectic festive schedule led to complaints from managers about the lack of recovery time for their players.

And, on New Year’s Day, a number of players suffered injuries that forced them from the field.

Here, the PA news agency looks at all the day’s injury incidents.

Tottenham’s miserable day saw them give up more ground in the race for the top four and lose captain Kane and midfielder Ndombele to injury. Kane suffered a hamstring problem while scoring a goal that was quickly ruled out for offside as Spurs lost to Southampton. Manager Jose Mourinho had already seen Dembele forced off after just 25 minutes on the south coast.

Defender Burn lasted just 22 minutes of Brighton’s first game of 2020, which ended in a 1-1 draw against fourth-placed Chelsea. The 27-year-old suffered a fractured clavicle following a collision with Reece James. Burn, who had been an ever present for the Seagulls under manager Graham Potter, faces up to two months on the sidelines.

Aston Villa secured a first away win since October but the afternoon was overshadowed by serious-looking injuries to goalkeeper Heaton and striker Wesley. Wesley, who opened the scoring in the first half, suffered a knee injury in a second-half challenge with Ben Mee. And England international Heaton was also carried off on a stretcher with just five minutes left having also suffered a knee problem.

If being 2-0 down at half-time was not bad enough, Newcastle were reduced to 10 men early in the second period after a string of injuries. Full-backs Manquillo and Willems both had to be replaced shortly before half-time, while Shelvey did not come back out after the break. And with all three substitutions used, centre-back Schar was forced off six minutes into the second half and Steve Bruce’s side limped to a third straight defeat.

Another win for Watford but it came at the cost of full-back Femenia. He was forced off through injury shortly before Wolves pulled a goal back in their 2-1 defeat. Femenia has played every minute of Wolves’ three previous games over the Christmas period.

Everton were forced into a change before their game at the Etihad even kicked off. Bernard was recalled to the starting XI by Carlo Ancelotti but he suffered an injury in the warm-up. Everton called on Tom Davies to replace the Brazilian in their line-up while Anthony Gordon was a late addition to the bench.