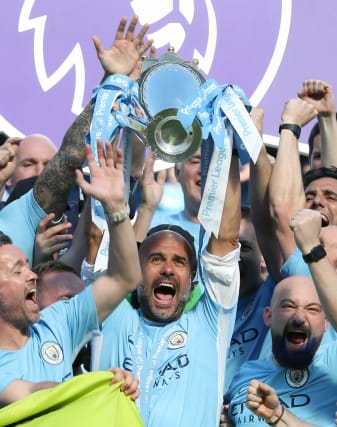 Pep Guardiola has no doubt Manchester City are the team of the past decade – but he believes catching Liverpool this season may require divine intervention.

Fuelled by the finances of Sheikh Mansour, City have risen from the shadows to win 10 major trophies in the past 10 years, including four Premier League titles.

Guardiola, who is responsible for half that trophy haul, is proud that the club – who would also top an aggregate points table over the period – have joined the elite.

The City boss said: “I think this club in the last decade was the best team in terms of points, in terms of goals, in terms of everything, titles even. So congratulate Manchester City for that. I think we did it incredibly well.

“Congratulations for all the people working here. They were fighting with huge ‘elephants’ here in England – big, big clubs with the biggest history. For the past decade we were part of them. That is amazing.”

After the 100-point campaign of 2017-18 and last season’s domestic treble, this term has been a relative disappointment to date, with City already 14 points behind leaders Liverpool.

But Guardiola does not want that to take the shine off what has still been a brilliant 12 months for the club.

Repeating Premier League success next year now looks beyond City, with runaway leaders Liverpool also having a game in hand.

Guardiola respects what has been done by Jurgen Klopp’s side, who finished runners-up by a point last season.

Asked how the Reds could be caught, the Spaniard said: “Work harder, play better, and pray.”

“We cannot control what a fantastic team like Liverpool have done so far and there are other issues you cannot control. When everyone is fit we can do it.”

Guardiola, speaking at a press conference to preview his side’s New Year’s Day clash with Everton, was unwilling to expand on what those external factors might be, although VAR might be high on his list.

City felt they were hard done by some decisions early in the season, not least when Gabriel Jesus had a late winner against Tottenham ruled out for a handball by Aymeric Laporte that nobody on the field even spotted.

On those factors, Guardiola simply said: “You know what they are. You know that.”