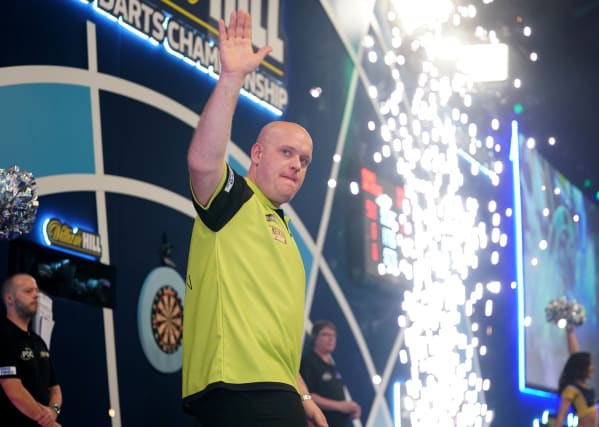 Defending champion Michael Van Gerwen will face Scotland’s Peter Wright in the final of the PDC World Championship after seeing off Nathan Aspinall.

The Dutch top seed was not at his best and struggled to get an early grip on the second semi-final at Alexandra Palace but, with Aspinall missing chances, he proved too strong and came through 6-3.

The final on New Year’s Day, as Van Gerwen bids for a fourth title, will be a repeat of the 2014 showpiece after Wright saw off Welsh third seed Gerwyn Price 6-3 in an ill-tempered clash.

Van Gerwen won four of the five sets that went to five legs as he condemned Aspinall to a second successive semi-final loss.

Van Gerwen told Sky Sports: “Of course with the win I feel phenomenal. It is always nice to be in the final but with my performance, how I played, I’m not too happy.

“It was tough but at the end of the day the most important thing is I won. I’ll have to do a bit better in the final.”

Scottish veteran Wright, 49, was more impressive as he saw off Price in a match with plenty of needle.

Wright was unimpressed with what he saw as over-exuberant celebrations from Price and refused to shake his hand at the end of the match.

Price’s histrionics came in the early stages as the first six sets were shared, despite Wright playing much the better darts.

But ‘Snakebite’ Wright finally took control and finished with 16 180s and an average of 98.39 as he eased home.

There were signs of nerves with victory in sight, and he missed seven darts to win the match in the ninth set, but the outcome was not in doubt and he prevailed at the eighth attempt.

Afterwards Wright, eye-catching as ever with multicoloured dye in his trademark mohawk, said he was not pleased with his own form but happy to get the better of Price.

He said: “I like ‘Gezzy’ but I don’t appreciate what he did. That’s why I didn’t celebrate, didn’t do anything. Sorry I was miserable up there.

“But he wanted me to concentrate, I concentrated. There you go, you lost.

“To be honest his average wasn’t that good for a guy to get to the final. He was nowhere near me and I didn’t even play my game. It spurred me on because he wound me up.”

Wright is now confident of going on to claim his first world title.

He said: “I am not going to throw it away again. I have matured after all these years. Michael hasn’t impressed me.”