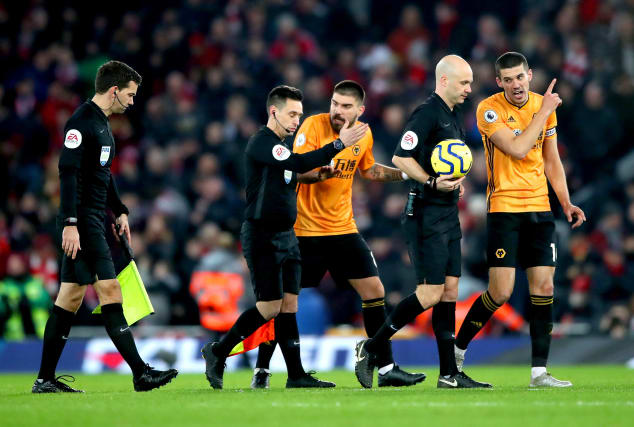 Liverpool restored their 13-point lead at the top of the Premier League table with a hard-fought 1-0 victory over Wolves which was beset by VAR controversy.

Sadio Mane put the hosts ahead in the 42nd minute when he latched onto Adam Lallana’s knockdown to score, but not without VAR intervention.

Referee Anthony Taylor initially disallowed the goal for handball by Lallana in the build-up but VAR ruled that the England international had brought down the ball with his shoulder and let the goal stand.

In first-half stoppage time, Pedro Neto thought he had equalised when he swept in Jonny’s cross, however, VAR stepped in once again to disallow the goal for a marginal offside decision – to the frustration of the Wolves players and staff, with boss Nuno Espirito Santo booked for his indiscretions.

Virgil Van Dijk also appeared to handle the ball in the build-up to the winner, with Wolves’ Conor Coady claiming referee Taylor told him that the incident was too far back in the move to be considered despite the defender playing a long pass to Lallana for the goal.

Wolves had late chances to snatch a point but Jurgen Klopp’s side secured their 18th win from 19 Premier League matches this season to sit 13 points clear of Leicester in second place.

Chelsea consigned Mikel Arteta to his first defeat as Arsenal head coach with a late 2-1 comeback win at the Emirates Stadium.

Arsenal dominated the first half and took a deserved lead through Pierre-Emerick Aubameyang’s 13th Premier League goal of the season in the 13th minute.

Frank Lampard made a tactical substitution in the 34th minute when he brought on midfielder Jorginho on for defender Emerson Palmieri and the Italy international was the man to bring Chelsea back into the match.

Jorginho was perhaps lucky to be on the pitch when he pulled back Matteo Guendouzi in the 77th minute when already cautioned, but he capitalised on a huge error by Arsenal goalkeeper Bernd Leno six minutes later to draw Chelsea level.

The Germany international misjudged a Mason Mount free-kick and Jorginho was on hand to tap into an empty net at the far post before Tammy Abraham finished off a counter attack with three minutes remaining to snatch victory and consolidate fourth place.

Manchester City bounced back from their 3-2 loss at Wolves to earn a 2-0 triumph against Sheffield United at the Etihad Stadium.

The visitors thought they earned a shock lead in the first half when Lys Mousset finished off a quick counter, only for the goal to be chalked off for offside by VAR.

City were not at their best but nudged ahead thanks to Sergio Aguero’s strike – his first since returning from injury – in the 53rd minute after collecting Kevin De Bruyne’s pass.

And De Bruyne wrapped up victory with seven minutes remaining to close the gap on Leicester to one point in third.