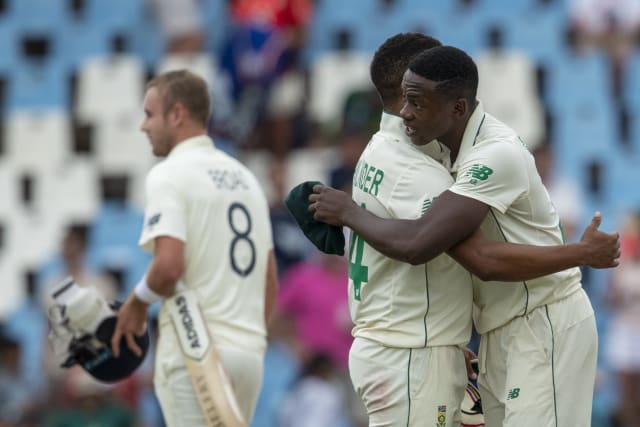 England failed to complete another mission impossible as they bowed out of 2019 with a 107-run defeat in the Boxing Day Test against South Africa.

The tourists arrived at Centurion’s SuperSport Park harbouring hopes of another improbable victory and a record chase of 376, channelling memories of their World Cup final win at Lord’s and the Ashes miracle at Headingley, but found themselves all out of escape acts.

Even Ben Stokes, the starring act in both of those dramas, could not find it in himself to defy cricketing logic one more time.

Against a spirited, talented and united South African attack they were bowled out for 268 late on the fourth afternoon to go 1-0 behind in the four-match series.

Romantics and superstitious fans would have found brief hope in Stokes’ arrival at the crease with 218 runs needed to win – the exact figure required when he strode out at Leeds in August – but his departure for 14, bowled by the left-arm spin of Keshav Maharaj, was the biggest body blow of all.

Rory Burns top-scored with 84, only seven of which were made on Sunday, while captain Joe Root contributed a committed 48, but the momentum never really left the Proteas.

Kagiso Rabada claimed four for 103, Anrich Nortje three for 56 and there was sound support from Vernon Philander, Maharaj and Dwaine Pretorius.

Cricket analytics company CricViz revealed that England’s chances of victory at the start of play, according to their metrics, was just 21 per cent. If that made for worrying reading for hopeful England fans, they went on to reveal that this was an even bigger long shot than their famous heist at Headingley. Back in August the equivalent number was 29 per cent.

Player of the match

South Africa wicketkeeper Quinton De Kock picked up the award, having made the highest score of the match – 95 in the first innings. He also compiled an important 34 on day three and took eight catches behind the stumps.

Former England and Middlesex bowler Mike Selvey on the illness affecting the camp.

No, not that one. With opening batsman Aiden Markram ruled out of the remainder of the series with a fractured finger, South Africa called up Keegan Petersen for the second Test in Cape Town. England have already had a long look at the 26-year-old Knights batsman, who scored 111 in the recent warm-up match in Benoni.