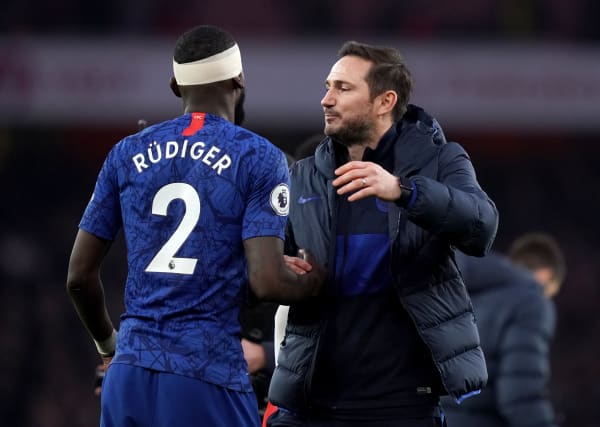 The Blues boss accepted Jorginho could easily have been sent off before tapping in the goal that turned the Emirates Stadium clash on its head.

Tammy Abraham’s 12th league goal of the term sealed the Blues’ win, after Bernd Leno had missed a free-kick to allow Jorginho to tap into an empty net.

Lampard hailed his men for battling back following Pierre-Emerick Aubameyang’s opener, but conceded Jorginho could easily have been dismissed for pulling back Matteo Guendouzi.

“It certainly could have been a second yellow,” said Lampard.

“In a London derby a lot of challenges like that. So we might have struck a bit of luck with that, but I don’t think it was that clear cut.

“Jorginho was the big catalyst for the change, winning second balls, showing that character.”

Arsenal tore into a disorganised Chelsea from the off, with an unmarked Aubameyang nodding home from a corner to hand the hosts a deserved lead.

Blues boss Lampard ditched the 3-4-3 formation just past the half-hour mark, though, withdrawing the struggling Emerson Palmieri and switching to 4-3-3.

The decisive switch eventually turned the game, with Jorginho proving pivotal to that reversal of fortunes.

Lampard insisted it was a change in mentality rather than tactics that helped Chelsea turn the tables on the Gunners, however, praising his players for eventually finding their bite.

“No I don’t think we got it wrong tactically at the start,” said Lampard. “It wasn’t so much the tactics, it was the spirit and the fight of the team.

“They were quicker, and we were lethargic initially.

“Sometimes it has to be a gesture with a change. And then after the changes we got better.

“It wasn’t so much the three at the back, but then again, Mikel Arteta isn’t silly; they found a way to pin our five back, and so I had to change.

“After I’d spoken (at half-time) the lads started talking and it was a bit aggressive, which was a good thing.

“And the reaction was everything I wanted. We’ve been rightly questioned recently.

“We were quiet in the dressing room after the Everton defeat and I didn’t like it. And in the home games we’ve been lacking something.

“It’s not a turning point, but we showed we can have a right go and win a game in a different way.”

New Arsenal boss Arteta believes Jorginho should have been dismissed for a second yellow card, but insisted the Gunners only have themselves to blame for defeat.

Arsenal have now lost four consecutive home matches in all competitions for the first time in 60 years.

Asked whether Jorginho should have been sent off, Arteta said: “I think that’s up to the referee but for me it’s very clear. That’s it.

“I blame my team (for defeat). We are responsible for everything we did wrong on that football pitch.

“The decisions we didn’t get right, obviously. The other things we cannot control or change them now.”