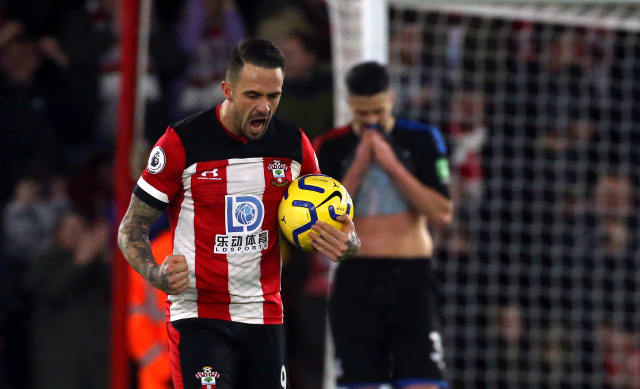 Danny Ings is loving life at Southampton and has credited the adoration he feels from fans and team-mates as a major contributor to his red-hot form.

Saints top scorer Ings is on course for the most prolific campaign of his career after scoring for the eighth time in as many starts to salvage a 1-1 draw against Crystal Palace.

The 27-year-old already has 14 goals for the season in all competitions and has been a key figure in pushing Ralph Hasenhuttl’s side away from the Premier League relegation zone.

Ings, who won a solitary England cap in 2015, is reaping the rewards of being injury-free at his boyhood club after a series of problems wrecked his time at former club Liverpool and interrupted his debut season on the south coast.

“I graft every day to try and be the best I can be,” Ings told Saints’ website.

“I’m here and enjoying my football again. I feel absolutely loved by the fans and my team, so all of that helps altogether.

“I try to look out for defensive mistakes, I’ve got quite a few of them this year where I’ve been switched on.”

Ings was alert to a dreadful backpass from Eagles defender Martin Kelly to slot home the 74th-minute leveller and earn Saints another precious point in the battle to avoid the drop.

The predatory strike was a bitter pill to swallow for Palace boss Roy Hodgson, who handed the player his solitary international appearance in 2015 and was unable to convince him to move to Selhurst Park last year.

Ings had been rested for Southampton’s surprise 2-0 Boxing Day win at Chelsea after firing a crucial brace in the 3-1 success at relegation rivals Aston Vila just before Christmas.

He believes the last three games set the benchmark for the rest of the season, which continues at home to Tottenham on New Year’s Day.

“This season has been very up and down for us,” said Ings, who is behind only Jamie Vardy in the Premier League scoring charts.

“We’ve been great the last three games. We’ve come a long way and that’s the level we need to be at.

“Unbeaten in three now, which is huge for us as a team, so we’re moving forward with that.”

Palace, who had a host of players missing at St Mary’s because of injury, led through James Tomkins’ second-half header after midfielder Max Meyer had an early strike ruled out by VAR for the tightest of offside calls against Wilfried Zaha in the build up.

The Eagles will begin the new year in the top half of the table, and manager Hodgson is delighted with the efforts of his players during a fruitful 2019 which has brought 16 top-flight victories.

“They are an incredible bunch and I am so proud of them, and it has been a wondrous 2019 in actual fact,” said the 72-year-old.

“We had an excellent spring to lift us up (the table), and here we are having taken 27 points from the first 20 games of the next one.

“So 2019 has been very good for us, we must now put that away and make certain that we keep fighting and working until we get (back) some of the players we are sorely missing.”