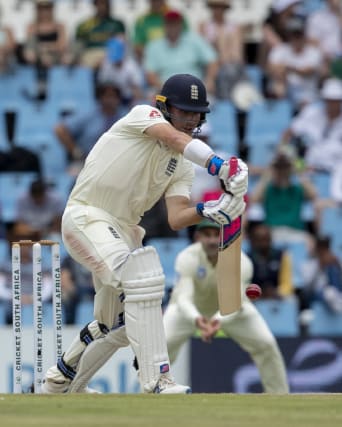 Headingley hero Ben Stokes and captain Joe Root were at the crease as England attempted to defy cricketing logic one more time on day four of the Boxing Day Test against South Africa.

Asked to chase a record 376 in the fourth innings at Centurion but resuming on a promising 121 for one, they lost overnight batsmen Rory Burns and Joe Denly in the opening session.

That left the side’s two premier batsmen with the toughest of asks as they looked to create a replica of their famous Ashes win in Leeds, with the pair taking the score to 171 for three at lunch.

Back in August they chased down 359 and anyone looking for omens would be enthused to note that both then and now, Stokes arrived at the crease with 218 runs required.

Burns had personally chipped 77 runs off the target on day three but South Africa’s opening bowlers conceded just two scoring shots in the first seven overs – one an outside edge, the other an unexpectedly dominant pull for six as Denly took on Kagiso Rabada.

Burns took more than half-an-hour to add to his score and could just as easily have been out – scampering a single from an overthrow as Rudi Second looked to run him out from short-leg. He fell to a major lapse soon after, attempting to pull the springy Anrich Nortje’s second ball but top-edging the softest of catches to mid-on.

Denly managed another six off Rabada, though Nortje might have caught it had he not lost sight of the ball, before being pinned lbw by Dwaine Pretorius. It was a tight decision but DRS confirmed Denly’s departure for 31.

At 158 for three the road ahead was a long one for Root (13no) and Stokes (4no) and the England skipper wore two nasty blows on the glove and wrist as he battled through.

The pitch was beginning to show signs of uneven bounce, one ball hitting wicketkeeper Quinton De Kock in the shins as another soared over his head for four byes, proving the job of making another 205 runs would be a mammoth task.