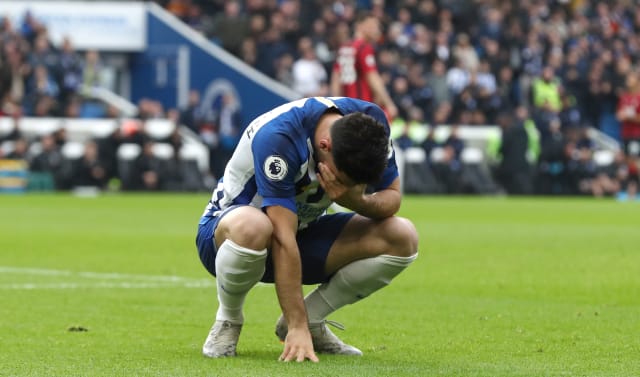 The Seagulls got off to a dream start, with Jahanbakhsh hitting his first goal for the club after just three minutes, before falling to the ground in tears, caught up in the emotion as he became the third Iranian to find the net in the Premier League.

The record signing joined the south coast side in July 2018 in a £17 million move from AZ Alkmaar but has had limited opportunities both under Potter and Chris Hughton, and was making his 27th appearance for the club.

“He’s been doing really well in training,” Potter said about the goalscorer.

“He’s been really good in how he goes about his work everyday and how he supports the team and how he acts as a professional and I’m just delighted for him that he can contribute to a performance.”

When asked about the emotion expressed by Jahanbakhsh following his strike, the Seagulls manager said: “I think it’s one of those, he was so taken by the moment, it was a nice moment in the stadium and I think all the supporters were genuinely delighted for him.

“He’ll take a couple of days to recover and we can go again for him.”

Aaron Mooy, on-loan from Huddersfield, scored the other goal in the 2-0 win, in the 79th minute, after impressing throughout the match in the centre of midfield, but Potter did not say whether the club were intending to make the move permanent.

“He’s Huddersfield’s player and we have to respect that,” the Seagulls manager said.

“Obviously I’m delighted with him, he’s a fantastic professional, intelligent football player and great person and I’m really happy for him that he’s now contributing to three points.”

Bournemouth have struggled recently and have managed to secure just two wins from their last 14 matches, with the defeat at Brighton leaving them just two points above the relegation zone.

When asked about their current league position, and the difference compared to last season, Howe said he believed this season was no different.

“Apart from the first season I don’t think we have been in the relegation zone after any number of games,” he said.

“This year it has been the tightest it’s been. I think we have to relish that challenge. It’s probably the most difficult moment we have had in the Premier League.

“When you consider the squad depth we have at the minute, we just have to deal with it and come through.”