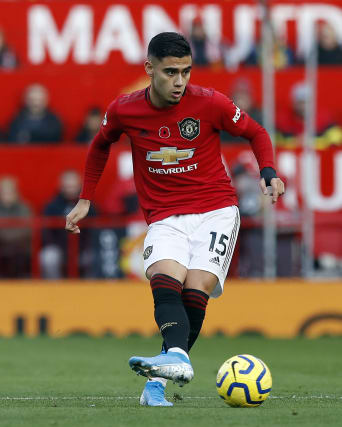 Andreas Pereira is determined to kick on and build momentum after Manchester United’s mental strength bore fruit at Burnley.

Ole Gunnar Solskjaer’s side were rocked at embattled Watford just a week ago, leading to renewed scrutiny and speculation over Christmas.

But United dug deep to bounce back with two wins in a 50-hour period as they followed the 4-1 comeback victory against Newcastle on Boxing Day with a 2-0 triumph at Burnley on Saturday evening.

In both matches they turned the lion’s share of possession into three points – something they had managed just once in the previous 17 top-flight games – while the trip to Turf Moor saw them end a club record 14-match run without a Premier League clean sheet.

“We knew it was going to be a difficult game, a difficult stadium here,” United midfielder Pereira, who impressed at Turf Moor, said.

“It was important after the victory against Newcastle, we wanted to keep on going and it was a good test and we did well.

“We know they play very direct and in the air. It’s very tough to play here.

“But we showed a great mentality and when we had the ball, we put it down and we played well so I think we did really well.

“(The clean sheet) was important. I think the backline and the midfield as well did very well.

“They were very calm and controlled the game for us and that made it up front easier.”

The back-to-back festive triumphs moves them to within a point of fourth ahead of Chelsea’s match at Arsenal, with the measured performances against Newcastle and Burnley boosting belief within the group.

“Confidence is really high,” Pereira told MUTV. “We have to keep going and we have to stay humble and work hard.

“We have to keep this momentum going and hopefully we can on New Year’s Day, my birthday, get the win.”

Anthony Martial opened the scoring on the stroke of half-time at Burnley, where Pereira forced a mistake from Charlie Taylor before providing a fine assist.

The France forward has now been directly involved in 10 goals in his 13 league starts this season, while fellow attacker Marcus Rashford continued his exceptional form with a goal at the death.

“I just remember pressing the left-back and I got the ball,” Pereira said. “When I got it I just seen Anthony straightaway.

“When I’d seen the pass, I knew it was a goal when he touched the ball.

“Anthony is in great form and Marcus as well, so it’s just a way of if I turn my body and play the ball into them you know it’s going to be a chance or a goal, so I am very happy for them.”

Few could argue with the end result at Turf Moor, where Phil Bardsley had the hosts’ best effort as his fine, low shot forced a good second-half save from David De Gea.

That was Burnley’s only shot on target as they ended 2019 in meek fashion, but full-back Bardsley focused on the positives.

“We are trying to do the right things,” the United youth graduate said. “We are miles ahead in the points’ tally to where we were last season and it’s something to build on.

“We’ve got a massive game on Wednesday (against Aston Villa) to look forward to. We’ll recover now and go again.

“This is what this time of year is all about. The games come thick and fast and we have to prepare ourselves properly. It’s a protein shake instead of a pint!”