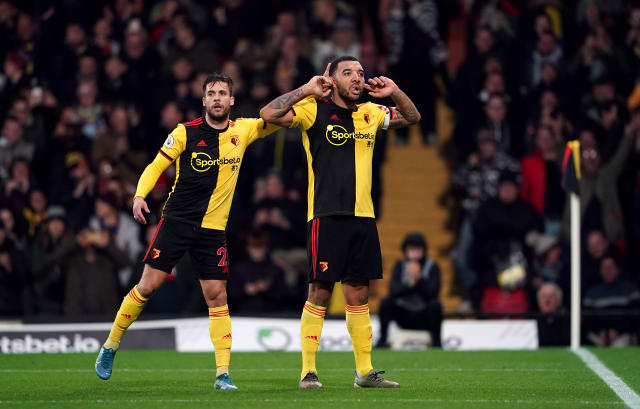 The Hornets skipper grabbed his first three minutes before half-time and added a second from the penalty spot in the 67th minute – 10 minutes after team-mate Adrian Mariappa had been sent off.

Ismaila Sarr scored a third not long after to make it back-to-back victories for Nigel Pearson at Vicarage Road and they are now three points from Premier League safety.

Villa boss Dean Smith endured a terrible afternoon in Hertfordshire and has major problems with this their fifth defeat from their last six league games.

Tom Heaton impressed in the win over Norwich on Boxing Day and was called into action inside a minute when he produced a superb point-back save to deny Christian Kabasele.

It was all the hosts during the opening exchanges and, despite a brief rally from Villa, it remained this way for much of the first half, but Ben Foster had to be alert with 25 played.

Conor Hourihane crossed in for Westley and his downward header was superbly diverted over the crossbar by Watford’s goalkeeper before minutes later the away forward wanted a penalty for a clash with Craig Cathcart, but VAR ruled no foul had been committed.

Watford went close five minutes before half-time when Sarr dribbled inside two opponents, but his side-footed shot was deflected wide by Kortney Hause.

Villa cleared the resulting corner, but the Hornets kept the ball alive and Abdoulaye Doucoure flicked on for Deeney, although he directed his close-range effort straight at Heaton.

He should have scored and yet made up for it in the 42nd minute when he scuffed home from six-yards after Doucoure had been denied by the visitors’ goalkeeper following a poor clearance from Ezri Konsa.

Deeney cupped his ears to the Villa supporters and it remained 1-0 at the break with Pearson’s team deservedly in the lead, but he was forced to replace Will Hughes with Nathaniel Chalobah at half time.

Smith could not have been impressed with his side’s showing and introduced Trezeguet for the ineffective Jota, which did lift the away side and their cause was helped a little more in the 57th minute when Mariappa was sent off.

The Watford defender received his second yellow card in the space of six minutes for a cynical foul on Henri Lansbury – after a similar challenge on Jack Grealish earned a booking.

Pearson reacted by withdrawing substitute Chalobah for Craig Dawson and did give the midfielder a hug as he left the pitch before the Hornets’ grabbed a second their play warranted.

Sarr sent Deeney away and Douglas Luiz came back and brought down the home captain.

VAR checked the incident, but the penalty stood and Watford’s number nine drilled down the middle to make it 2-0 in the 67th minute.

It was dreamland for the hosts four minutes later when Etienne Capoue won possession from Grealish, linked up with Deeney and crossed in for Sarr to score and help the Hornets finish 2019 on a high.