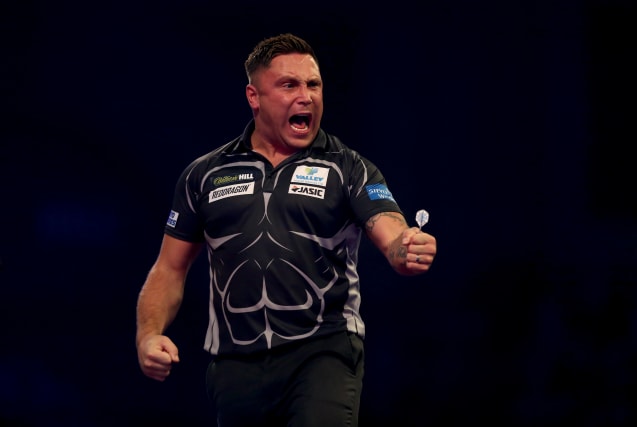 Welshman Price, the number three seed, overcame Whitlock 4-2 to reach the quarter-finals for the first time in his career.

The former rugby player did not find the scintillating form which saw him whitewash John Henderson in the previous round with an average of 105.

Whitlock, the self-styled Wizard of Oz from New South Wales, lacked magic on the doubles as three wayward shots cost him the first set and Price took advantage at the fifth attempt.

He missed another five doubles to stay in the second set, but Price went right off the boil and lost four consecutive legs as Whitlock reduced the deficit to 2-1.

The pair exchanged sets before Price, the two-time Grand Slam champion, produced some belated brilliance to claim the sixth set 3-0.

“From the off I was rubbish and Simon wasn’t any better,” Price told Sky Sports.

“But he gave me chances. I think it was a poor performance from both of us and I was lucky to win.

“The pace of the game wasn’t suiting me, I think Simon did that on purpose.

“It was slowed down to a pathetic pace, but I’ll learn from it and do better the next time I come up against that situation.

“I like a good flow and a good game, but some people just try to drag you down.”

Adrian Lewis, champion in 2011 and 2012, earlier bowed out after being in prime position to take out Dimitri Van Den Bergh.

Lewis led 3-1 but the Belgian forced a decider with finishes of 98 and 76 and won the final set to set up a last-eight date with 2019 UK Open champion Nathan Aspinall.

Dobey took the first set before losing the next three, two of which he was two legs clear in.

Durrant was forced to sweat as Dobey levelled the match, but the reigning BDO world champion clinched his quarter-final spot with a 146 checkout.

“That was a hard game,” Durrant said. “I really suffered with the heat.

“It’s not necessarily that it was so hot in here.

“But I was playing a good friend and so much had been made of the fact that it was a north east derby.”

Wright, the 2014 runner-up who was sporting a purple mohican haircut, stormed into a 3-0 lead with three ton-plus finishes.

But Wright dipped dramatically and Dutchman De Zwaan fought back to set up a final set decider.

Wright recovered from a break down to win the final set 5-3 and said: “I had some energy tablets because I felt I was going to pass out.

“I won the first three sets and then my body shut down. It was horrible, but I got through.”

World youth champion Luke Humphries reached the quarter-finals for the second successive year with a 4-1 victory over Kim Huybrechts.

Humphries hit 10 maximums in a contest which turned in his favour when he punished his Belgian opponent for a declining a dart at the bullseye.

The 24-year-old took out 146 in the deciding leg of set three and will play Wright next.