Leicester battle back to draw with Harlequins 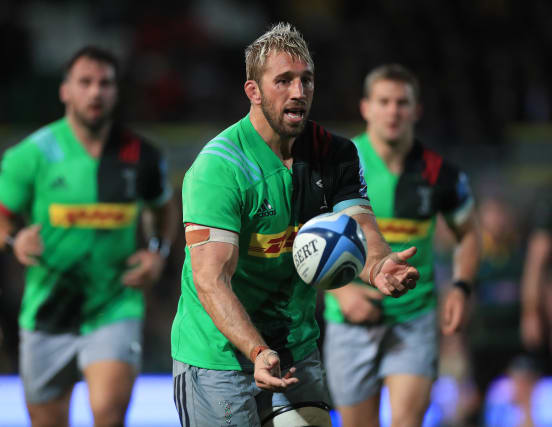 Leicester came from 14 points down to snatch a 30-30 draw with Harlequins in Big Game 12 on Saturday at Twickenham.

Scores from Marcus Smith and Chris Robshaw opened up a big second-half lead for the Londoners, but Tigers fought back through Jordan Taufua and Telusa Veainu.

Alex Dombrandt shelled a big chance to win it at the death as a slippery ball popped out of his grasp with the line in sight, as the two sides repeated their draw from the very first Big Game 11 years ago.

It was Quins who made the opening forays, a high tackle from Dan Cole giving Smith the chance to put his side on the board from the tee, an opportunity he gleefully accepted.

But the Londoners could not rest on their laurels, as Italian international Michele Campagnaro was floored minutes later with a knock to his knee, the centre brought to tears as he hobbled off in place of the prodigious Gabriel Ibitoye.

George Ford squared things up with a penalty of his own inside 10 minutes, before slotting his side ahead from the tee.

But Quins hit straight back, a quickly-hooked five-metre scrum fed to the returning Paul Lasike, who at full pelt powered his way over with Leicester defenders hanging off in rag-doll style, Smith making no mistake with the extras.

It seemed the spark that the Londoners needed, as they once again poured forward, Tigers conceding the penalty after being caught offside, with Smith duly adding to his tally to take them through to the break.

Only minutes out of the dressing rooms, Leicester were level once again, however, as a lurking Kyle Eastmond intercepted a blind Sinckler pass to go the distance for his first Tigers try since December 2018.

But the England prop made amends minutes later when a series of big drives set up a five-metre scrum, with Smith dancing his way through from the set-piece for the score.

Quins really hit their stride as a series of hefty carries set up Chris Robshaw to power over the line and leave Leicester needing a big swing.

But they sparked a glimmer of hope when a driving maul spun to set up an unstoppable shove, Taufua putting the finishing touches to the move with Ford adding the conversion.

Smith and Ford traded penalties before Will Collier was sent to the bin after repeated infringements to set up a grandstand finale.

Quins tried to slow things down in vain, as Ford chipped over the line for Veainu to gather and score, the fly-half’s conversion levelling things at 30-30.

A man down, Quins went on the offensive, Ibitoye stretching his legs before Dombrandt spilled the ball with the line beckoning for the final chance.