Jahanbakhsh and Mooy fire Brighton to victory against Bournemouth 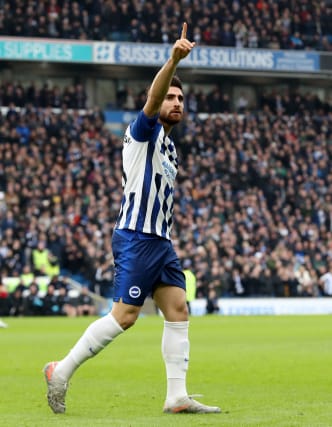 Brighton recorded their first home win since November 2 with a convincing 2-0 victory over a lacklustre Bournemouth side at the Amex Stadium.

The Seagulls suffered their biggest home defeat in the Premier League in this fixture last season but got off to a dream start this time around, when Alireza Jahanbakhsh hit his first goal for the club.

The game was not without controversy, with VAR overruling a second-half goal from Dan Burn after the left-back was judged to be offside.

Brighton did not have to wait too long for their second goal, however, as Aaron Mooy, who impressed throughout in the centre of midfield, took a touch on his chest before firing home and making sure of all three points for the home side.

The result moves the Seagulls three points above Bournemouth, who have just two wins from their last 14 top-flight matches.

Less than three minutes after the game kicked off, Jahanbakhsh weaved through the Bournemouth defence and struck the ball past Aaron Ramsdale to give his side an early lead, before falling to the ground in tears as he became the third Iranian to find the net in the Premier League.

The Cherries almost struck back immediately, with Mathew Ryan forced into a diving save to prevent Joshua King from finding the far corner after he was cleverly played in by Diego Rico.

Both sides enjoyed periods of possession after the opener, with Mooy running the midfield for Brighton, but clear-cut opportunities proved hard to come by.

The home side appeared to have doubled their lead at the start of the second half after the Cherries’ defence were unable to clear the ball, which fell to the towering Burn who took a touch before turning and slotting past Ramsdale.

Referee Paul Tierney awarded the goal only for VAR to undertake a lengthy review for offside, and left-back Burn was denied his first for the Seagulls.

Brighton came close to striking again just moments later, as Yves Bissouma drove into the box, and his low drive beat the goalkeeper but rebounded back off the post.

VAR intervened for a second time at the 75-minute mark for a possible handball by Jack Stacey, with the referee’s original decision upheld and no spot-kick awarded.

However, Mooy doubled his side’s lead in the 79th minute.

The 29-year-old, on loan from Huddersfield, controlled the ball from Leandro Trossard on his chest, before taking it away from the defender and steering home.

Bournemouth had made all of their substitutions and had to finish the game with 10 men after Stacey was forced from the field through injury.