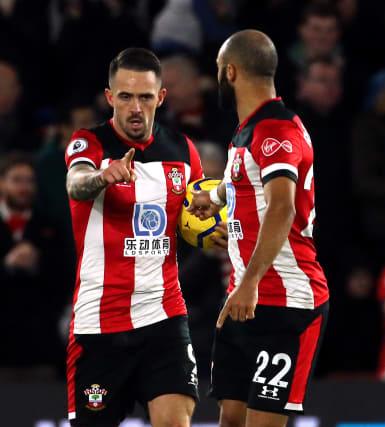 Danny Ings capitalised on calamitous Crystal Palace defending to earn Southampton a 1-1 draw and a precious point in the fight for Premier League survival.

Ralph Hasenhuttl’s hosts had looked in danger of slipping to a seventh St Mary’s defeat of the campaign after James Tomkins nodded them ahead early in the second period.

Palace were also left to rue a disallowed first-half strike from midfielder Max Meyer, which was chalked off by VAR due to a narrow offside call against Wilfried Zaha.

Saints, who sit four points above the relegation zone, are now three games unbeaten on the back of vital victories at Aston Villa and Chelsea, while Palace remain comfortably in mid-table.

After an uninspiring opening 15 minutes, the game looked set to be sparked into life when the unmarked Meyer emphatically fired home Zaha’s pull back.

The goal was celebrated exuberantly among Palace’s healthy away following but their joy was quickly cut short as a VAR check deemed Zaha’s left shoulder was marginally offside when he received the ball from James McArthur.

The exceptionally-tight call was a major let off for Saints in their attempt to rid themselves of the worst home record in the division and build on crucial away wins either side of Christmas.

Palace perhaps enjoyed their own moment of fortune in the 32nd minute when captain Luka Milivojevic escaped an early dismissal after furiously shouting at referee Andy Madley having been booked for bringing down Sofiane Boufal.

Milivojevic’s angry reaction risked lightning striking twice for the Eagles, who last season had Zaha dismissed on this ground for sarcastically applauding a yellow card from referee Andre Marriner.

Saints defender Jan Bednarek then squandered the best opportunity of an opening 45 minutes devoid of a shot on target when he fired over at the back post following James Ward-Prowse’s inviting free-kick from the right.

The game was in desperate need of a breakthrough and it arrived five minutes after the restart.

Milivojevic lifted a delightful curling free-kick into the box, allowing Tomkins to rise and nod his first goal since January into the bottom-right corner via the underside of the crossbar.

Palace appealed in vain for a 59th-minute penalty after Ward-Prowse clumsily clattered into Meyer following Zaha’s powerful surge down the right.

Saints were struggling to breakdown stubborn opposition until they received a helping hand in the 74th minute.

Kelly’s sloppy backwards pass rolled behind team-mate Tomkins, allowing the prolific Ings, who had been rested at Stamford Bridge on Boxing Day, to run in on goal and coolly slot beyond Vicente Guaita.

Hodgson, who awarded Ings his solitary England cap back in 2015, admitted in the build-up to the match that he still had ‘a bee in his bonnet’ about failing to take the player to Selhurst Park.

Things almost became worse for the 72-year-old coach moments later when only a sensational one-handed save from Spanish goalkeeper Guaita denied Saints substitute Moussa Djenepo to prevent a quick-fire turnaround.

Southampton edged the closing stages but were unable to force a winner.