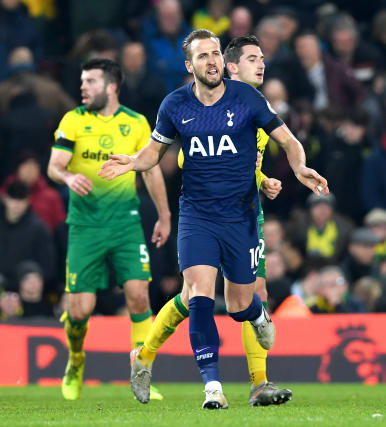 Tottenham needed a late penalty from Harry Kane to salvage a 2-2 draw at Norwich, who were the latest team to suffer from VAR’s interpretation of the offside law.

Kane struck from the spot in the 83rd minute to deny the Canaries a first Premier League home win since beating Manchester City in September after they led through Mario Vrancic’s opener and Serge Aurier’s own goal.

It might have been a completely different story had Teemu Pukki’s goal not been marginally ruled out by the perpendicular lines of VAR with Norwich leading 1-0, as the focus again zooms in on the offside law and technology’s role in applying it.

There were fortunate to come up against a Spurs team enduring one of their worst performances of a patchy season, but Jose Mourinho’s men, who had previously levelled through Christian Eriksen, did at least rally for a point thanks to marksman Kane.

The draw, however, meant they missed the chance to go into the top four for the first time since September 14 and Mourinho is still scrambling to find a way to make his side more solid.

For Norwich, who remained bottom, their winless run now stretches to eight and this was the fourth home game in a row where they let a winning position slip.

Given both sides’ defensive fragility this season, it was little surprise that the opening 20 minutes were packed with chances.

Marco Stiepermann had a fine opportunity to score for Norwich as he burst through after Tanguy Ndombele and Eriksen had tackled each other, but Paulo Gazzaniga rescued his side with a superb one-handed save.

Spurs responded as Dele Alli blazed wildly over after being teed up by Kane, who then saw Tim Krul deny him after being played through on goal.

But it was Norwich who took the lead after some calamitous defending from Juan Foyth.

The Argentinian was robbed of possession by Emiliano Buendia and Vrancic took advantage, homing in on goal and firing past Gazzaniga.

This was a shambolic display by Spurs and only the perpendicular lines of VAR stopped them going 2-0 down just after the half-hour.

Aurier was tackled and Vrancic’s long ball found Pukki in acres of space, and the Finnish striker converted with aplomb.

However, VAR assistant Andy Halliday ruled that Pukki was offside by millimetres, and the goal was chalked off, to the dismay of Norwich fans who were chanting ‘It’s not football any more’.

Mourinho had seen enough and hooked off defenders Jan Vertonghen and Foyth at the break in search of a response from his team.

And it had the desired effect within 10 minutes as Spurs levelled.

Jamal Lewis handled the ball and Eriksen fired in a 20-yard free-kick that had Krul grasping at air.

But Spurs’ defensive woes did not disappear and Norwich regained the lead six minutes later in comical style.

Substitute Davinson Sanchez was caught out of position and Toby Alderweireld’s clearing of the danger saw him poke the ball goalwards, which deflected off the covering Aurier and into the net.

Spurs applied plenty of pressure as they again found themselves chasing the game, however, and they were rewarded in the 83rd minute.

Alli played Kane in on goal and he was wiped out by Christoph Zimmermann, with little doubt about the resulting penalty as Kane slotted home.

The visitors had the best part of 15 minutes to find a winner, but they did not get close and it ended all square.