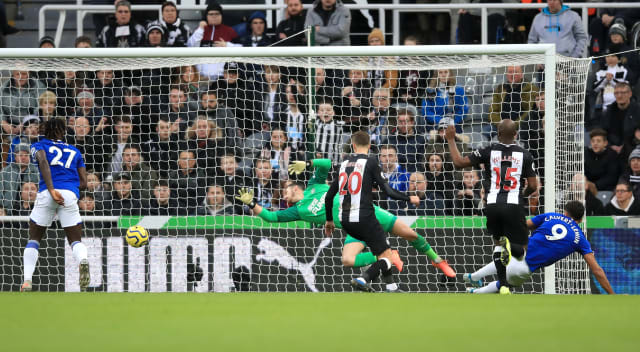 Dominic Calvert-Lewin was the hero again as Carlo Ancelotti’s Everton continued to climb the Premier League table with a 2-1 win at Newcastle.

Calvert-Lewin was the match-winner on Boxing Day as Ancelotti began his Everton reign with a 1-0 victory over Burnley.

And the 22-year-old striker took his season’s goal tally to 10 – the best of his career – with two more at St James’ Park inflicting a third defeat in four games on Steve Bruce’s Newcastle.

Calvert-Lewin opened the scoring after Gylfi Sigurdsson’s blocked free-kick fell into his path in the 13th minute, but Fabian Schar (56) volleyed Newcastle level after being set up by Andy Carroll.

Everton’s winner came in the 64th minute when Calvert-Lewin slotted home from six yards after Richarlison had charged down the right.

Deeney put the Hornets ahead three minutes before half-time when Tom Heaton palmed Abdoulaye Doucoure’s drive into his path.

Watford were reduced to 10 men in the 57th minute when Adrian Mariappa brought down Henri Lansbury and was sent off for a second bookable offence.

But Deeney converted his third goal in as many games midway through the second half, slotting home from the penalty spot after Douglas Luiz had shoved him over.

The win moves Watford to within two points of 18th-placed Villa.

Brighton recorded their first home win since November 2 with a convincing 2-0 home victory over struggling Bournemouth.

Iran international Alireza Jahanbakhsh gave the Seagulls a third-minute lead with a powerful shot, his first goal for the club.

VAR ruled out a second-half goal from Dan Burn after the Brighton left-back was judged to be offside by the tightest of margins.

But Brighton’s domination was rewarded 11 minutes from time when Aaron Mooy controlled the ball from Leandro Trossard on his chest and swept home with his right foot.

Palace were denied an early lead when Max Meyer smashed home only for Wilfried Zaha to be ruled marginally offside by VAR in the build up.

James Tomkins headed Palace in front from a Luka Milivojevic free-kick five minutes after the break.

But Danny Ings levelled with his 12th goal of the season after 74 minutes following a Martin Kelly error.