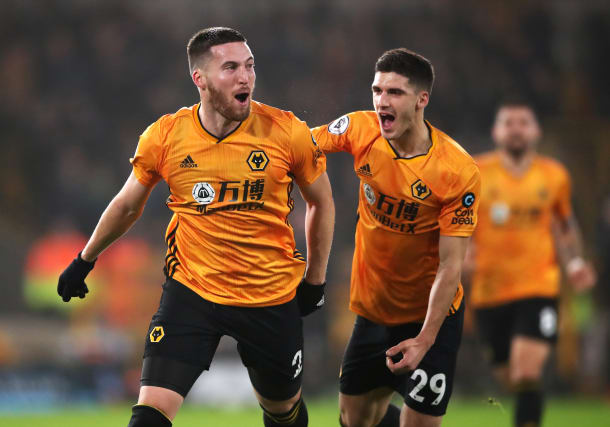 Ten-man Manchester City blew a 2-0 lead to lose a chaotic game at Wolves and hand Liverpool another huge boost in the title race.

Matt Doherty’s 89th-minute strike earned the hosts a stunning 3-2 comeback win after Adama Traore and Raul Jimenez also struck on a rollercoaster night which threatened to boil over.

Raheem Sterling’s brace either side of half-time had given the visitors a commanding lead following a crazy first half.

Sterling’s first came when he netted the rebound after Rui Patricio had twice saved his penalty, given by VAR.

The spot-kick was retaken after VAR ruled encroachment to add to a thrilling opening after Ederson was sent off for taking down Diogo Jota.

The Football Association will also investigate an incident when a hip flask appeared to be thrown at Sterling from the home fans after his first goal.

But Wolves’ second-half fightback left the defending champions third and 14 points adrift of Liverpool, with the Premier League crown surely heading for Merseyside.