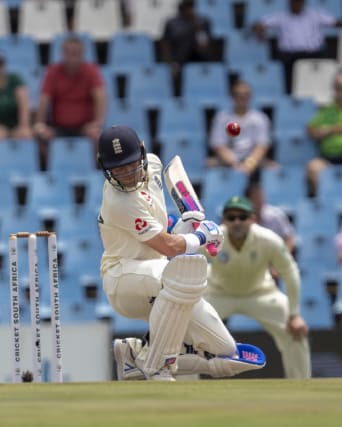 England were bundled out for 181 by South Africa as they lost control of a Boxing Day Test which accelerated wildly towards a conclusion with 15 wickets on day two.

Responding to the Proteas’ 284 all out, the tourists found themselves comprehensively outmatched by the inspired seam duo of Kagiso Rabada and Vernon Philander as they conceded a 103-run deficit.

On a Centurion pitch that has strongly favoured the bowlers, and which shows no signs of settling down, that could well prove a decisive margin but England pacemen did their best to fight fire with fire.

Stuart Broad and James Anderson both struck early before Jofra Archer picked up two, leaving South Africa 175 ahead on 72 for four at stumps. Archer was involved in late drama, risking removal from the attack with two high full-tosses at nightwatchman Anrich Nortje – only being spared when square-leg umpire Paul Reiffel saw his no-ball signal from square-leg over-ruled by Chris Gaffaney.

The decisive contribution belonged to Philander, who has already announced his retirement at the end of the series and is expected to sign for Somerset as a Kolpak. Barely breaching 80mph, he instead relied on exemplary skill and constrictive control to pick up four 16 in 14.2 overs.

The fiery Rabada was the perfect counterpoint, menacing his way to three for 68.

No reminders are needed that this is a side who have come back from worse positions – with Ben Stokes’ miracle of Headingley seeing them chase down 359 after being routed for 67 during the Ashes – but once again they find themselves a long shot.

The day’s first point of business was to wrap up South Africa’s first innings and Broad promptly did so, besting Philander with his seventh ball of the morning.

South Africa felt that anything close to 300 was a competitive score on this surface but by the time Rabada and Philander had finished a wonderful new-ball examination, their total looked ominous.

England’s openers were dismissed summarily as they slipped to 15 for two inside 20 minutes. Rabada issued a strong statement of intent with his first over, working over Burns in such torrid fashion that his highlight was successfully over-turning a caught behind verdict first ball.

Philander quickly put him out of his misery, kissing the outside edge courtesy of some waspish movement off the seam. Quinton de Kock gathered easily in his gloves for the first of six catches, a joint South African record with AB de Villiers.

Rabada was simply too good for Dom Sibley, who nicked a fast, rising delivery in the channel, and an early collapse appeared to be on the cards.

Joe Root wore two nasty blows from Rabada, rapped on the wrist as he fended one bouncer and clattered on the helmet ducking another, while Joe Denly would have banked a 25-ball duck had Rassie van der Dussen clutched a low chance at second slip.

Nortje kept the drama up by hitting 93mph almost immediately but the intensity cooled just enough to see England to the relative comfort of 60 for two at lunch.

Root could not build on that, caught behind for 29 after advancing on Philander and punching his bat in frustration.

Stokes, who has been dealing with the strain of his father’s serious illness as
well as a bout of dehydration on day one, arrived in the middle at 70 for three
and batted with his customary defiance as he and Denly more than doubled the total.

Stokes was settling into his repertoire with successive slog-sweeps for six off Keshav Maharaj, a punched on-drive for four and an uppercut over the slips.

Denly’s half-century arrived with a rollicking drive but when Dwaine Pretorius jagged one into the inside for a maiden Test wicket moments it was the start of the end as England lost six for 39.

Stokes had 35 when Nortje had him driving away from his body and then picked off Jonny Bairstow, recalled due to Ollie Pope’s illness only to lose his off stump for one. Rabada and Philander wrapped up the tail with ease before England’s seamers wiped out the Proteas’ top four in under 15 overs.

Archer was involved in a ding-dong battle that boiled over when he beamed Nortje and then appeared to repeat the dose. England argued that the batsman made it look worse by falling to the ground as the ball flew not far over the stumps and Gaffaney opted not to take Reiffel’s guidance.