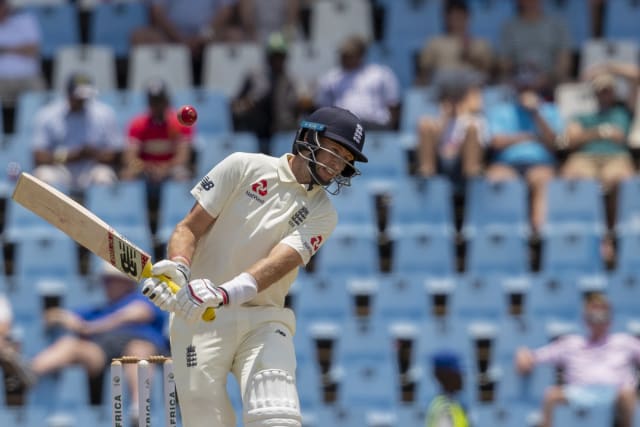 England were subjected to an intense and sustained examination from South Africa’s pacemen on the second morning of the Boxing Day Test as they fought hard to reach 60 for two at lunch.

The tourists needed just 11 deliveries to take the final South African wicket in Centurion, Stuart Broad finding Vernon Philander’s outside edge to pick up his fourth scalp and end the innings at 284 all out.

If that looked a par score at the time it soon seemed a distant one as Kagiso Rabada and Philander turned in a wonderful spell with the new ball.

Rabada bowled with real pace and aggression as he extracted fresh life from the surface, while Philander operated with exemplary control as he failed to concede a single run from his five-over burst.

Rory Burns was given caught behind from Rabada’s first ball of the innings and briefly looked to have joined his opposite number Dean Elgar in bagging a diamond duck. He successfully avoided that fate after DRS showed his bat had hit the ground rather than the ball, but was worked over in torrid fashion by Rabada in an over that served as a statement of intent.

Nicely softened up, Burns then nicked his first delivery from Philander, bowling at a much gentler pace but coaxing the perfect amount of help off the surface.

Dom Sibley was next man down, feeling for a quick, rising delivery by Rabada. Umpire Paul Reiffel missed the edge this time but Sibley walked as soon as South Africa signalled for a review.

At 15 for two things were tough and getting tougher all the time. Joe Root wore two nasty blows from Rabada, hit on the wrist as he fended one bouncer and clattered on the helmet ducking another.

Philander had a lid on Joe Denly at the other end and the number three had nought from 25 balls when he was dropped by Rassie van der Dussen at second slip.

The introduction of the change bowlers brought no initial respite, Denly inches away from playing Dwaine Pretorius into his stumps and Root seeing a thick edge spray past gully after Anrich Nortje hit 93mph.

The intensity finally dipped towards more normal levels in the final half-hour of the session, allowing the batsmen to pick up some hard-earned runs prior to lunch.