Pearson: Andre Gray still has part to play at Watford 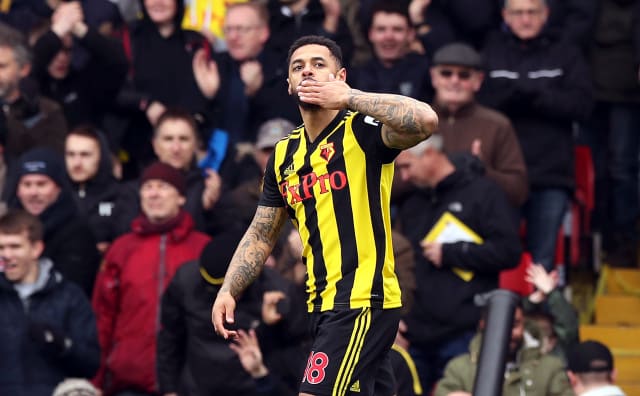 The striker has fallen out of favour after beginning the season in the team under Javi Gracia. However, since the Spaniard’s departure in September and the return of Quique Sanchez Flores as manager, Gray has started just three league matches.

Pearson, who has been in charge for three games, believes the 28-year-old offers Watford something different in attack and will prove useful during the second half of the campaign as they fight to keep their place in the top flight.

“He’s got pace and he can stretch teams and he will be important for us to be able to bring to the team what are clearly his strengths,” said Pearson.

“At the moment, in my time here his opportunities have been limited but, as I’ve said, the games programme now is so congested that it goes without saying that it tests a squad of players’ belief in what is the squad ethic.

“It’s alright saying, ‘yeah we’ve got a strong squad ethic’, but what it really tests is when a player is given an opportunity, they go out there and take it. And for me he’s a player that I know will bring some different qualities to us because he’s got more pace to run the channels.

“I actually spoke via message with Joey Barton, who was at Burnley at the same time, the other day and he was telling me that he’s a good lad and he’ll do well for us.

“I know he’s a different type of player for us and his opportunity will come. What he’s got to be, like everyone else who is currently on the edge of the team or on the cusp of getting a chance, is able to take the chance when they get it, and really that’s the squad ethic that we have to live by.”

Meanwhile, Pearson expects Ismaila Sarr to be available for the home game against Aston Villa on Saturday.

Sarr suffered a head injury in the draw at Sheffield United on Boxing Day, with the forward’s eye swelling up following a challenge from Jack O’Connell that saw him collide with the advertising hoardings on the side of the pitch.

“The conversations were firstly is the player OK, is it a concussion situation?” said Pearson.

“He’d got a knock on his eye which was swelling up at quite a fast rate and so the protocol that we have is to make sure that first and foremost the player’s health comes first.

“It continued swelling and he came off at half-time but he’s OK. He’ll be OK for Saturday.”