Newcastle midfielder Longstaff determined to bounce back against Everton 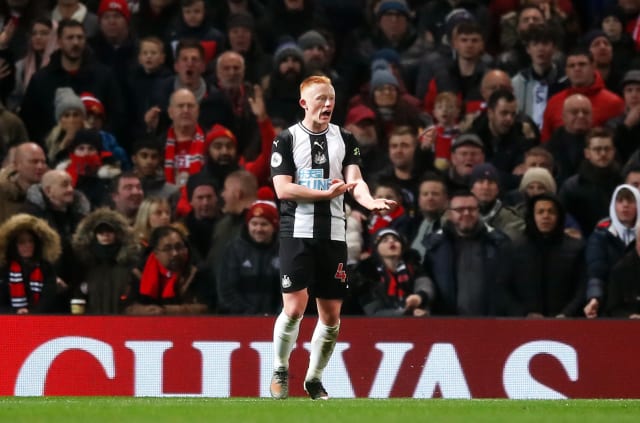 Newcastle midfielder Matty Longstaff is determined to quickly bounce back from the loss at Manchester United and “put it right” against Everton.

After scoring the winner for his boyhood club on a dream top-flight debut against Ole Gunnar Solskjaer’s side in October, the 19-year-old looked to be the scourge of the Red Devils once more.

Longstaff coolly fired Newcastle ahead at Old Trafford, only for Manchester United to come roaring back as Anthony Martial’s brace complemented efforts from Mason Greenwood and Marcus Rashford in a 4-1 win.

“I think the first 30 minutes we’re in the game and then we make a couple of mistakes and then it kind of kills us.

“The first 30 minutes we were solid as a team and then obviously we’ve kind of shot ourselves in the foot there with a few mistakes.

“But it happens in football and we’ve got to get on with them.

“You come here, we want to pick up points and keep moving up the table and we haven’t done that today, so obviously we’re disappointed as a team.”

But there is no time for Steve Bruce’s men to wallow in self-pity given their quick turnaround, with Newcastle welcoming Everton to St James’ Park on Saturday.

There will be just 43 hours and 40 minutes between the final whistle at Old Trafford and their final match of 2019, but Longstaff is looking forward to making amends

“We’ve been on a good run obviously until today,” he told NUFC TV.

“The good thing for us is that in 48 hours we get the chance to put it right against Everton.

“We’ve got a good changing room in there and we’ve got some big characters so I’m sure we’ll be ready come Saturday.”

Longstaff’s confidence at a response came with an undertone of frustration given the way things panned out on Boxing Day.

Not only was he disappointed by the way Newcastle gifted the hosts goals after his early opener, but the fact Scott McTominay was not called for a foul on him in the build up to Rashford making it 3-1 as half-time approached.

“I think when you score, if you can kind of hold on we’re in a great position,” Longstaff said. “But obviously conceding the goals has killed us.

“To be fair, I thought he whacked us in the face to be honest with you. Then obviously they go down and score, it’s not great.

“Kind of 2-1 you’re still in there. 3-1 it kind of knocks the wind out of you and obviously a bit deflated going into half-time.”

Longstaff looked bright on just his fifth appearance of the season and is hoping to play in front of a sell-out St James’ Park crowd on Saturday, having been stood alongside the fans not so long ago.

“I’ve grew up with them,” he added. “Last year I was in the away end on Boxing Day. We’ve got the best fans in the league and I know that personally.

“Obviously we thank them. They’re everywhere we go, even when we’re getting beat four at the end.

“They’re singing and we can all hear them so obviously we appreciate them coming down.”