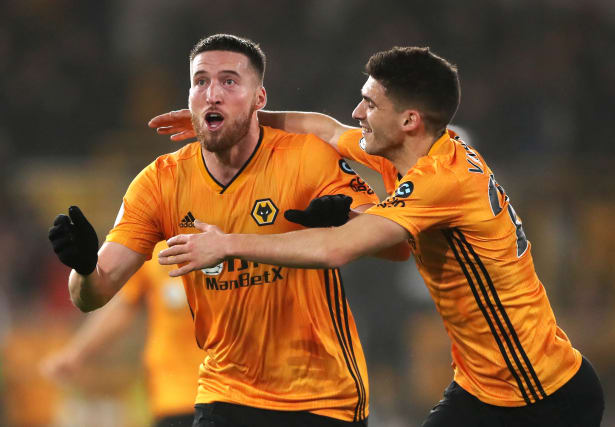 Pep Guardiola insists Manchester City run the risk of missing out on the top four if they give up on the league after a thrilling 3-2 Premier League defeat at Wolves.

Adama Traore and Raul Jimenez levelled after Raheem Sterling’s double, his first coming from a rebound following a twice-taken penalty – awarded by VAR – which Rui Patricio saved both times.

City goalkeeper Ederson was dismissed after just 12 minutes and the defending champions now trail Liverpool by 14 points in the Premier League having played a game more.

But, with City third, boss Guardiola is adamant they cannot give up on retaining their title.

He said: “We cannot prioritise the cup competitions because if so next season we might not be in Europe.

“We are used to being at the top fighting and now we are far away. We have to adjust mentally to the situation and prepare for the next games.

“We have to move on. The first season was quite similar to now but in the second and third seasons we were there all the time and winning a lot of games.

“Now, because of some mistakes and some other situations, we are far away.”

During a bad-tempered first half Wolves were also forced to warn fans they face punishment after a hip flask was thrown onto the pitch in the aftermath of Sterling’s opener. The Football Association will also investigate the incident.

In the first flash point of a turbulent first half Ederson was sent off after 12 minutes when he fouled Diogo Jota after the striker raced through.

Guardiola added: “It was a quick action, maybe we can defend better, we need to anticipate the position and Eddy needed to decide in one second. It’s difficult to take a decision in this time.”

But nine minutes later Sterling made it 1-0 after VAR awarded a penalty when Leander Dendoncker brought down Riyad Mahrez.

Sterling needed two attempts to score though, tapping in the rebound when Patricio saved his second spot-kick.

Patricio had also stopped his first penalty but VAR ruled it needed to be retaken after encroachment.

Sterling made it 2-0 five minutes after the break but gave the ball away soon after to allow Traore to fire in.

Traore set up Jimenez’s leveller eight minutes from time when he robbed Benjamin Mendy and Doherty drilled in from the edge of the box in the 89th minute to win it and lift Wolves up to fifth.

Boss Nuno Espirito Santo said: “We performed very well, it was an incredible night. The reality of the game changes when Manchester City have one man less.

“We played well, we tried. We conceded a mistake in the second half for the goal but we didn’t change our way and kept looking for solutions.

“We keep on going and keep believing, the second goal was a mistake and we shouldn’t do it.

“I would not have been disappointed even if we did not win because we played well.

“We had much more of the ball than expected, so we had to find solutions.”