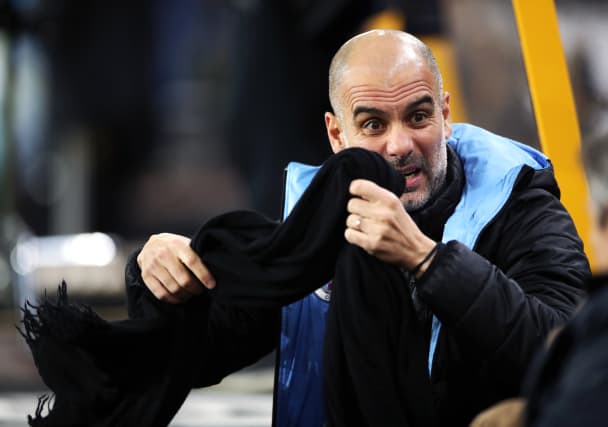 The defending champions lost a 2-0 lead to slump to a 3-2 defeat on Friday after playing almost 80 minutes with 10 men following Ederson’s red card.

Raheem Sterling’s brace – including a rebound from a twice-taken penalty – had put City in control but they now sit third, 14 points behind Premier League leaders Liverpool having played a game more.

Guardiola said: “For the players it hurts a lot, to lose in the last three, four, five minutes always hurts. I don’t have anything to say.

“We have to stay mentally strong because in less than two days we have another one (against Sheffield United).

“We are used to being at the top fighting and now we are far away. We have to adjust mentally to the situation and prepare for the next games.

“We have to move on. The first season was quite similar to now but in the second and third seasons we were there all the time and winning a lot of games.

“Now, because of some mistakes and some other situations, we are far away.”

Wolves, though, face a Football Association investigation after a hip flask was thrown from the stands in the aftermath of Sterling’s first goal.

The PA also warned fans during the game they faced punishment if caught throwing objects.

It was one of a number of flash points during the first half with goalkeeper Ederson sent off for fouling Diogo Jota after 12 minutes.

VAR awarded the visitors a penalty after Leander Dendoncker brought down Riyad Mahrez – with Sterling eventually scoring after Rui Patricio twice saved from the spot – and he grabbed his second five minutes after the break before Wolves’ comeback.

Manager Nuno Espirito Santo said: “We performed very well, it was an incredible night. The reality of the game changes when Manchester City have one man less.

“We played well, we tried. We conceded a mistake in the second half for the goal but we didn’t change our way and kept looking for solutions.

“We keep on going and keep believing, the second goal was a mistake and we shouldn’t do it.

“I would not have been disappointed even if we did not win because we played well.”