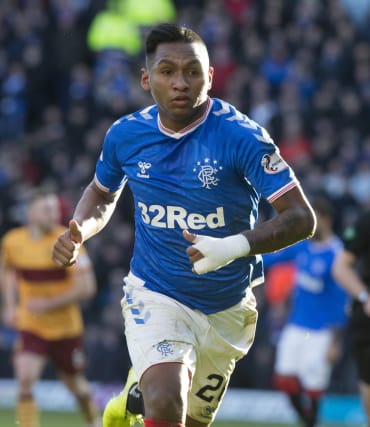 Steven Gerrard has backed Alfredo Morelos to keep his cool on his return to Celtic Park on Sunday.

Gers’ 28-goal hitman was sent off five times last season, with his final dismissal coming at Parkhead after he aimed an elbow at Hoops skipper Scott Brown back in March.

This term, the Colombian has largely managed to stay out of trouble.

His only red card so far came at Fir Park two weeks ago for an inflammatory gesture aimed at the Motherwell support.

But his manager saw signs during the Light Blues’ Boxing Day win over Kilmarnock – in which Morelos climbed off the bench to score the winner – to show the striker has learned his lesson ahead of this weekend’s crucial clash with Neil Lennon’s Ladbrokes Premiership leaders.

Gerrard said: “I have got no doubt Alfredo will be ready to face this challenge at the weekend. He’s in the best place he can be. His behaviour has massively improved again.

“When he came on again yesterday there were people trying to provoke him and he just rolled on with it. He was brilliant.

“It’s going to be hostile at Celtic Park, so it’s important for all the players to keep their discipline. Emotions run high all the time in derby matches.

“Let’s hope we’re talking about the football rather than people losing their cool and sending offs.”

Morelos suffered fresh derby agony earlier this month when he blew a string of chances – including a second-half penalty – as Rangers failed to convert Betfred Cup final domination into silverware.

However, there has been no sign of a Hampden hangover, with the 23-year-old netting in each of the three games he has featured in since.

And Gerrard hopes he is now ready to finally break his 11-game drought against Celtic this weekend.

He said: “I thought Alfredo’s all-round performance was really good in the final. He created a lot of the chances for himself out of nothing.

“He’s just got to go do exactly the same thing but try and take the big moments in the game. If he does it will give us a better chance of winning.

“His inner resolve is an area of him that I don’t think you ever have to worry about.

The final defeat was the only game out of the last 17 that Rangers have lost.

They now sit five points behind their bitter rivals with a game in hand but are hoping to keep the title race boiling as they head into the winter break.

“It’s a huge fixture and it’s very difficult to play it down,” admitted Gerrard. “Old Firm fever is always the same with the big build-up.

“We’re ready, we’re in good form. We’re looking forward to it. It will be a really tough game. We’re aware of Celtic’s home record and their consistency from the start of the season until now.

“But we can’t be going into this game in better shape because of where we are right now.

“It’s never a nice place to be when you lose a cup final. I’m not going to try to paint a different picture.

“But when you analyse what you put into the final and the performance, I couldn’t ask for any more from the players.

“I was very proud of their efforts on the day. The final was decided by big moments going against us. We have to live with that, we have to accept it.

“But this is a different game, a different competition. We proved on the day that we’re more than a match and this is a game where the players should go in with belief and confidence.

“This is the last game before the break. They have nothing to save themselves for, so just go empty the tank and see what we can take away from there.”