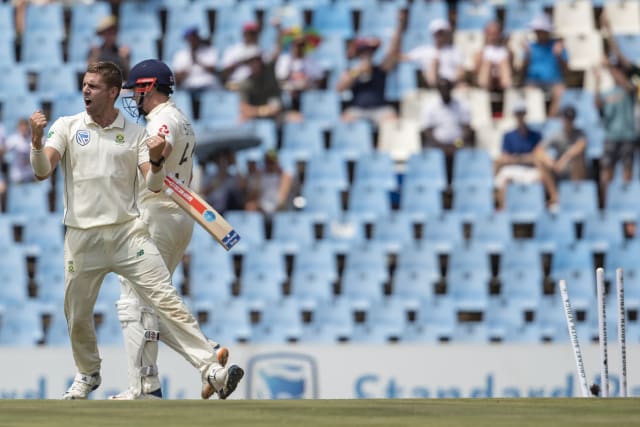 England were bundled out for 181 by South Africa as they lost control of a Boxing Day Test which accelerated wildly towards a conclusion with 15 wickets on day two.

Responding to the Proteas’ 284 all out, the tourists found themselves comprehensively outmatched by the inspired seam duo of Kagiso Rabada and Vernon Philander as they conceded a 103-run deficit.

On a Centurion pitch that has strongly favoured the bowlers, and which shows no signs of settling down, that could well prove a decisive margin but England’s pacemen did their best to fight fire with fire.

Stuart Broad and James Anderson both struck early before Jofra Archer picked up two, leaving South Africa 175 ahead on 72 for four at stumps.

Archer was involved in late drama, risking removal from the attack with two high full-tosses at nightwatchman Anrich Nortje – only being spared when square-leg umpire Paul Reiffel saw his no-ball signal from square-leg over-ruled by Chris Gaffaney.

The decisive contribution belonged to Philander, who barely breached 80mph but instead relied on exemplary skill and constrictive control to pick up four 16 in 14.2 overs.

Six of the best for De Kock

Wicketkeeper Quinton to De Kock was on course for a world record behind the stumps when he caught each of his side’s first four wickets. Only four men have ever taken seven, a milestone that was briefly under threat as edges kept coming. In the end he was only offered two more chances, both taken, to match the South African record of six – jointly held by his new head coach Mark Boucher and AB de Villiers.

Sam Curran carried the England attack at times of day one, despite being its youngest member. After closing with four wickets he signed off his post-play press conference with a hope that he would be celebrating a maiden five-for come the morning. Joe Root did start with the left-armer but he only managed six balls before Stuart Broad took the last

Self help or no help?

Jos Buttler was spotted on the team balcony reading the book ‘Stillness is the Key’ early in England’s first innings. A New York Times number one bestseller by Ryan Holiday, which claims to harness the teachings of philosophers including Confucius, Seneca and Nietzsche and advocates slowing down to get ahead in life. Buttler was slow, scoring 12 in almost an hour, but fell tamely.

England’s time in South Africa has been beset by an illness bug that has now affected around half the squad. Mark Wood became the last squad member to be laid low and remained back at the team hotel with Ollie Pope, Chris Woakes and Jack Leach. It is not just the playing staff who have been impacted, with security manager Sam Dickason and digital manager Greg Stobart also confined to their quarters on Friday.

Day three of five, though the game now looks highly unlikely to go the distance. All of England’s energies must now go into keeping the chase as low as possible, then hoping for something special.