England on the back foot as South Africa’s bowlers shine 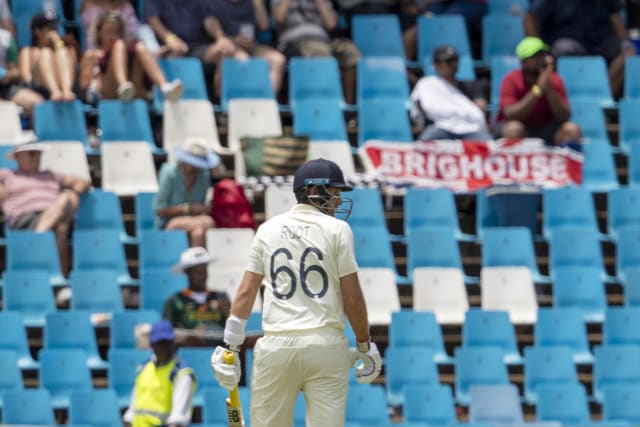 South Africa’s seamers turned the screw on England as the tourists were rolled over for 181 on the second day of the Boxing Day Test in Centurion.

After bowling the hosts out for 284 in the third over of play, Stuart Broad taking care of Vernon Philander for his fourth of the innings, England’s batsmen were swept aside in 53.2 overs by a magnificent display from the home attack.

Philander’s day was about to get considerably better, claiming exemplary figures of four for 16 in 14.2 constrictive, consistent overs and making his imminent retirement appear rash.

Kagiso Rabada provided the fire, taking three for 68 and physically intimidating the opposition with his speed and hostility, while Anrich Nortje chipped in with two.

Openers Rory Burns and Dom Sibley were ruthlessly dispatched with the new ball, which Rabada and Philander utilised outstandingly, and there could easily have been an early collapse such was the quality of their initial burst.

Instead Denly, benefiting from Rassie van der Dussen’s dropped catch at slip while still on nought, played his part in nerve-settling stands of 55 with Joe Root and 72 alongside Ben Stokes.

Root, having batted through a fiery Rabada spell that saw him clattered on the wrist and the helmet, was furious to give it away on 29. Advancing towards Philander to try and break the shackles of his exemplary line and length, he only succeeded in feeding wicketkeeper Quinton de Kock one of six catches.

Philander, who has already announced his international exit at the end of the series and is expected to confirm a Kolpak deal with Somerset, had conceded only five runs from 10 overs at tea.

Stokes, who has been dealing with the strain of his father’s serious illness as well as a bout of dehydration on day one, arrived in the middle at 70 for three and batted with his customary defiance as he and Denly more than doubled the team’s total.

Things had just started to settle down, with Rabada’s economy rate beginning to tell a rather unkind story and Stokes settling into his repertoire with successive slog-sweeps for six off Keshav Maharaj, a punched on-drive and an uppercut for four.

That is when South Africa reclaimed control, with three wickets for eight runs in the space 17 balls.

Denly had just raised his bat in acknowledgement of a hard-fought half-century when Pretorius jagged one back in sharply and kissed the inside edge, a fine way to open his Test account.

Nortje then got his rewards for an accurate and rapid spell, clean bowling Jonny Bairstow for one on his return to side and drawing Stokes into a loose drive outside his off stump for 35. Instead of releasing the pressure with the handsome boundary he envisaged, the all-rounder’s exit gave a huge boost to the home side.

England took tea 127 behind but with two capable strokemakers at the crease in Sam Curran and Jos Buttler. There was a brief flurry of boundaries in their stand of 26 but nothing like sufficient substance and neither lingered.

Curran was pushed on to the back foot by Rabada, nudging off his hip and towards short-leg. Sharp reactions and safe hands were still needed to complete the dismissal and Zubayr Hamza had both.

Buttler was close behind, wafting the bat at Philander with no apparent rhyme or reason as De Kock leapt to grab his sixth take. Stuart Broad proved easy pickings for Rabada and Jofra Archer was last man out when Philander completed his work with by knocking back off stump.