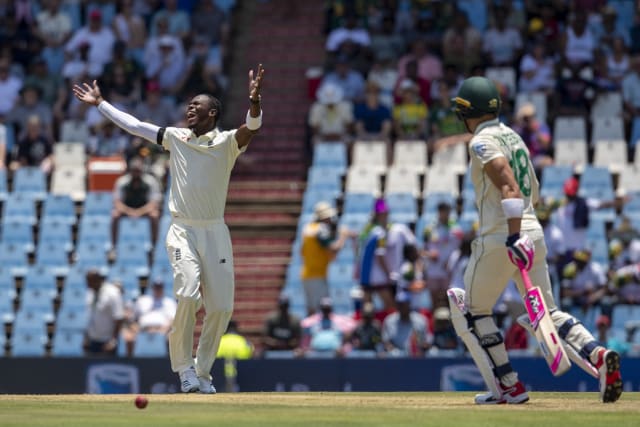 England will attempt to dramatically shift the momentum of the Boxing Day Test on day three against South Africa, when Jofra Archer will find himself under scrutiny after a beamer row.

Fifteen wickets tumbled in Centurion on Friday as ball dominated bat, with England dismissed for 181 to finish the day 175 behind.

The hosts will resume on 72 for four as they look to put the match beyond the tourists. Archer is free to play his part in the England cause but might have been removed from the attack had things played out differently in the penultimate over of the day.

He signed off with a pair of high tosses at Anrich Nortje, both botched variations of his slower ‘knuckle ball’ which left the nightwatchman on his backside as he took evasive action.

The first was called no-ball and had the second have been treated similarly, he would not have been able to bowl again in the match. Paul Reiffel did signal no-ball from square-leg but fellow umpire Chris Gaffaney declined to call it from the bowler’s end, with the delivery seemingly passing at a lower height than its predecessor.

Philander had already announced that he would be retiring from international duty at the end of the current series, but that looked a premature decision as he bowled with sustained brilliance to claim four for 16. South Africa fans can forget any prospect of the 34-year-old changing his mind, though. Asked about reports that he was heading to Somerset on Kolpak terms, he said: “Everyone knows it.”

Six of the best for De Kock

Wicketkeeper Quinton De Kock was on course for a world record behind the stumps when he caught each of his side’s first four wickets. Only four men have ever taken seven, a milestone that was briefly under threat as edges kept coming. In the end he was only offered two more chances, both taken, to match the South African record of six – jointly held by his new head coach Mark Boucher and AB De Villiers.

Self help or no help?

Jos Buttler was spotted on the team balcony reading the book ‘Stillness is the Key’ early in England’s first innings. A New York Times number one bestseller by Ryan Holiday, which claims to harness the teachings of philosophers including Confucius, Seneca and Nietzsche and advocates slowing down to get ahead in life. Buttler was certainly slow, scoring 12 in almost an hour, but his tame departure hardly constituted success.

England’s time in South Africa has been beset by an illness bug that has now affected around half the squad. Mark Wood became the last squad member to be laid low and remained back at the team hotel with Ollie Pope, Chris Woakes and Jack Leach. It is not just the playing staff who have been impacted, with security manager Sam Dickason and digital manager Greg Stobart also confined to their quarters on Friday.