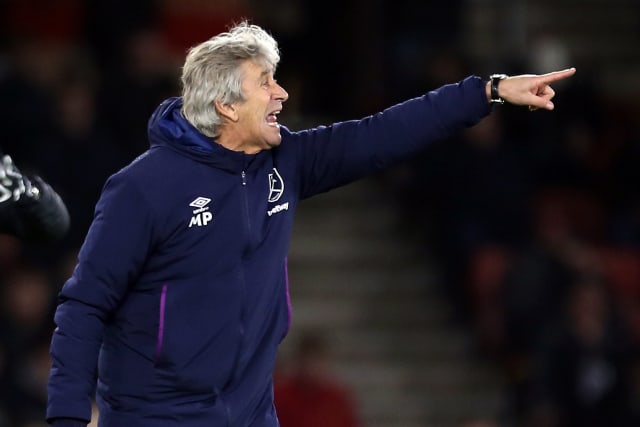 Manuel Pellegrini was disappointed with West Ham’s 2-1 defeat at Crystal Palace and felt they deserved more from the Boxing Day fixture.

Roberto Snodgrass put the Hammers ahead in the 57th minute and they looked on course for back-to-back wins to relieve some of the pressure on experienced Chilean manager.

But Cheikhou Kouyate levelled with 22 minutes to go and Jordan Ayew produced a moment of magic on the stroke of full time to give Roy Hodgson’s team all three points.

It means West Ham have only registered two victories from their last 12 games in the Premier League and sit one point above the bottom three.

“Of course, when you are winning 1-0, you are disappointed to lose the game 2-1,” Pellegrini said.

“I think it was similar to the game against Crystal Palace at home when we got the lead, they didn’t create chances but they scored at the end.

“Now they score in the last minute of this game. After the first goal, I thought we dominated. I don’t remember any saves for Roberto.”

West Ham have lost 15 points from a winning position after this late collapse and Pellegrini’s captain Mark Noble and centre-back Angelo Ogbonna become involved in a heated exchange in the 53rd minute at Selhurst Park.

The Hammers midfielder berated the Italian before Aaron Cresswell tried to play peacemaker, but he needed Michail Antonio to step in and prevent Noble unleashing a volley of anger at a second team-mate.

Pellegrini insisted he did not see the incident, but added: “We try always to be a consistent team but one or two moments decide the outcome of this game.

“We played well against Southampton and against Chelsea. I don’t think today we were a bad team, but you need good performances and good results.”

The hosts had arguably shaded the London derby before Snodgrass’ opener, but responded positively to going behind with Kouyate volleying in against his former side after Ayew’s knock-down before the forward’s wonder goal.

Ayew produced a pirouette to dribble between a couple of West Ham players and then he chipped over Roberto to give his team a seventh league victory of the season.

“When I saw Jordan walking off the pitch after doing his television interviews holding the man of the match award, I thought that has gone to the right man today,” Hodgson said.

“The winning goal was just an incredible individual effort. You just have to take your hat off to Jordan Ayew.

“He worked so hard up to that point and yet still found the energy, the strength to produce that pirouette on the edge of the box and find his way past the two defenders coming in to block him and then show the composure after all that to chip the goalkeeper.

“I was really happy with that goal, probably not as happy as Jordan is but I was very happy with it too.”