Pearson hails Foster heroics as Hornets dig in for draw 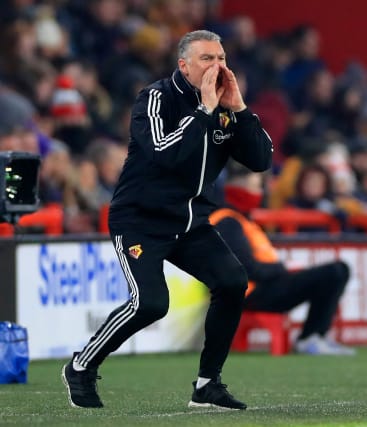 Watford boss Nigel Pearson hailed an “unbelievable” save by Ben Foster after the goalkeeper starred in their 1-1 draw at Sheffield United.

Foster produced one of the saves of the season as the Hornets’ recent revival continued with an away point on Boxing Day.

The former England goalkeeper kept his team in the match with a superb stop from point-blank range to deny John Fleck just after the hour at Bramall Lane.

Lys Mousset traded passes with David McGoldrick before delivering a pin-point cross into the area for Fleck, who connected with the ball sweetly. It seemed a certain goal, but Foster somehow clawed the shot away from on his line to keep the score at 1-1.

It remained that way and the points were shared after Oliver Norwood’s penalty cancelled out Gerard Deulofeu’s opener for Watford, who climbed off the bottom of the Premier League table with the point in South Yorkshire.

Pearson said: “There were a couple of really good saves from him and one unbelievable one for sure.

“It’s important that players can contribute in the way that they’re selected to do. For such an experienced goalkeeper who has the fire in his belly to go out there and perform, he’s the type of player you can look in the eyes every day when you work with him and you know he will do what he can on any given day to deliver.

“But I think for all the possession and pressure that Sheffield United had, we still kept them at arm’s length to a certain extent.

“I wouldn’t try and suggest that we were on top of the game, but we had our moments and we made it difficult for Sheffield United to find that winner and the important thing for me is the fact that we showed some real traits of resilience in what is a difficult place to come.

“The mantra is, I suppose, if you can’t win it then don’t get beaten. We had to dig our heels in today and we had to be resilient and sometimes ride our luck, but we go away with something for our efforts.”

Blades boss Chris Wilder felt his team were below their best and thought a draw was a fair result.

“We were a little bit flat, said Wilder. “We weren’t at full tilt today and we weren’t at out best.

“So with that in mind, it was a fair result. It was always going to be a tough game and we huffed and puffed, but we couldn’t find that pass or that final finish.

“We made bad decisions and went a bit individual, so we could never build momentum.”