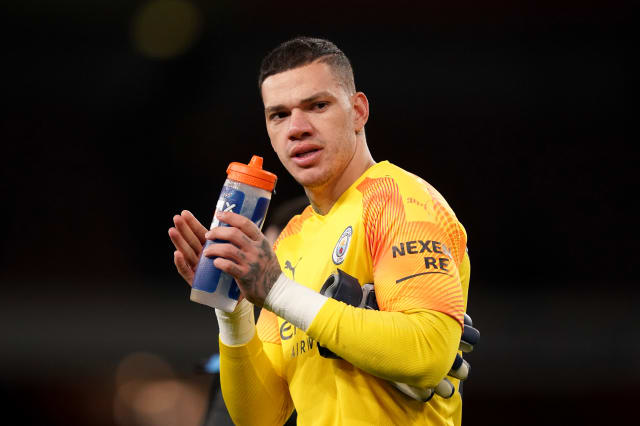 Manchester City’s rivalry with Liverpool may have intensified in recent years but, as far as goalkeeper Ederson is concerned, it exists only on the pitch.

Headlines were made last month when City star Raheem Sterling and Liverpool defender Joe Gomez clashed while on England duty as emotions from club football spilled over.

City and Liverpool are now the dominant forces in English football. City have won the last two Premier League titles while Liverpool have excelled in Europe in that time, winning one Champions League and reaching another final.

Games between the two clubs have become feisty affairs – and their meeting at the Etihad Stadium in April could be a crunch encounter – but Ederson has tried to remove some of the emotion by highlighting his friendship with his fellow Brazilians in the Liverpool side.

The 26-year-old said: “I have a good relationship, not only with Alisson (Becker) but also with (Roberto) Firmino and Fabinho.

“When we have a day off in the same day, we sometimes gather, we have a barbecue. It’s difficult with our routine and the amount of games to have the same day off, but we have done it a few times before. Our rivalry is only on the pitch.”

Liverpool have a big lead at the top of the Premier League but Ederson insists City will not give up hope of chasing the Merseysiders down.

He said: “We know the gap is big, but we need to carry on with our job. We need to keep giving our best on the pitch, trying to win game by game.

“We know it’s going to be very difficult – Liverpool are having a great season – but in football anything can happen. We need to be ready for any outcome.”

Ederson insists, however, he is not spending much of his time thinking about Liverpool. He feels the priority is simply to win games. City travel to Wolves on Friday.

He said: “I’m the type of player that only focus on my team. Obviously, at the last stages of the season, you also focus on the other contenders for the title race, but there is still a lot of the championship left.

“I’m a player that usually focus on my team, try to give the best for my team-mates, and I don’t look much at what the other teams do.”

Wolves beat City when the sides met at the Etihad Stadium in October. City are again set to be without John Stones and David Silva for the clash while Sergio Aguero, recently recovered from a thigh injury, is likely to be on the bench.