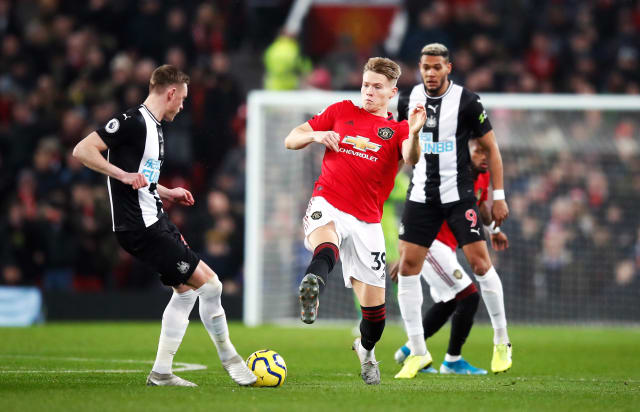 Anthony Martial’s brace book-ended fine efforts from Mason Greenwood and Marcus Rashford as the Red Devils got back to winning ways in style on Boxing Day.

The 4-1 triumph against Newcastle was an impressive response to Sunday’s humiliation at embattled Watford and Matty Longstaff’s early opener at Old Trafford, where an injury to McTominay was the only real negative.

Booked after just 24 seconds for a challenge on Sean Longstaff, the 23-year-old soon flew into hefty back-to-back challenges with the Longstaff brothers in the third minute.

McTominay looked in discomfort after but managed to play on until half-time, only for the Scotland international to be seen leaving Old Trafford on crutches.

“He’s done his ligament in the knee, probably,” United boss Solskjaer said. “I don’t know how bad it is, so let’s see.

“The boy has got the biggest heart of the lot and he played until half-time. You know when you stiffen up after, so we’ll have to find out tomorrow to see how he is.

“(It happened) when they knocked together, but you see the attitude of the kid – and of everyone, to be fair, in the beginning of the game.

“So, not sure if he’s going to be ready for Saturday (against Burnley) – probably not – but he’s healed quickly before.”

It would be a shock to see McTominay line up at Turf Moor, where United will be desperate to secure back-to-back victories heading into 2020.

They certainly stand every chance if they can repeat the spirit and attacking bite that saw off Newcastle.

“You saw the intent straight away, really, with the boys,” Solskjaer said.

“The attitude was always to win the ball, go forward, you could see we flew into tackles. So, I was never worried about the reaction – there has always been a reaction.

“You’ve got to earn it and today we earned it I felt.

“You can say they made mistakes, Brucey has probably mentioned he’s not been happy with some of the mistakes they made, but we made them make their mistakes.

“I thought the pressing, intensity, attitude, that showed, and we made it hard for them.”

Solskjaer picked out his goalscorers for particular praise after a match that left Newcastle boss Bruce bemoaning his side’s sloppiness.

“I know it’s Christmas but we’ve gifted them it,” the former Man United defender said. “We all feel Man U didn’t have to do much.

“You can’t make that many mistakes, come here and expect to get away with it and we’ve been punished, which is the disappointing thing.

“For the last two or three months, the reason why we’ve got a few results is the way we defended and gave nothing away.

“And today we’ve made far too many individual errors and once you do that against quality opposition like them then you’re going to get punished.

“It was a bad equaliser, it was a worse second one, poor third one, ridiculous fourth one. You can’t make that sort of mistake at this level, let alone coming to Old Trafford.”