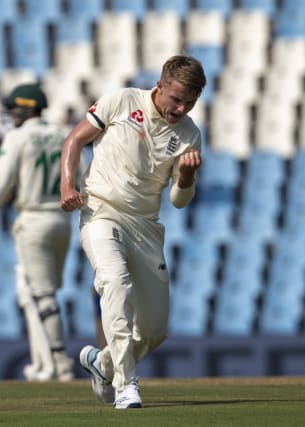 Sam Curran expressed pride in England’s collective spirit rather than his own career-best bowling performance on a challenging first day of the Boxing Day Test against South Africa.

England’s preparations have been badly affected by an illness in the camp, with Ollie Pope, Chris Woakes and Jack Leach all ruled out of the series opener in Centurion, while Stuart Broad and Jofra Archer both played despite spending a week battling symptoms.

To make matters worse Ben Stokes, who has already had to cope with his father’s admission to hospital, spent two long periods off the field being treated by medical staff for dehydration.

Step forward Curran, a man who might not have been guaranteed his place before the selection options were limited but left the field as the fulcrum of the attack.

He finished with four for 57 in the Proteas’ stumps score of 277 for nine, including the key wicket of top-scorer Quinton De Kock for 95.

If ever there was a time for a 21-year-old to take his rightful share of the spotlight, this was it.

Instead, the left-armer said: “It’s been a really tough week for us as a team and I’m really proud of how we stuck together as a group. We made sure we were fighting for one another and stuck with the guys who are a little bit ill.

“We are sticking together because it’s not nice when you have three guys at the hotel who may have been bowling in this match.

“We would have liked to have bowled them out, but nine down is not a bad effort. It was a really warm day, not much breeze. Ben had some dehydration and fingers crossed he is feeling better.

“We want him to be as well as possible and we know his character is very strong.”

At times England’s senior bowlers were put in shade by Curran’s consistency, accuracy and ability to force his way into the game, particularly given the fact he was thrust into a much more central role by Stokes’ predicament.

Typically, though, he shared the praise.

“I am loving learning from the guys,” he said.

“They are world-class performers. Jofra has just had an amazing summer. Broad and Jimmy, they are legends. This is my first time playing cricket in South Africa so I feel I am learning from them.”

Broad rallied despite being clearly under the weather and removed Kagiso Rabada with the last ball of day one to end things on a high. England will now be hoping to wrap things up early in the morning and set about the job of moving ahead in the game.

For the hosts, the aim is to frustrate their opponents and eke out at least another 23 runs.

“It’s not a bad score. If we somehow get to 300 that can be a challenging total,” said De Kock, who lifted his side from 111 for five with some risky but effective strokeplay.

“It is quite tough to at on, but if you apply yourself you can score some runs. I just tried to make sure we kept our intent, kept ticking over and not just get blocked up.

“With England, when their bowlers are on top, they are a really tough team to score runs against. If we get 300, it’s 50-50. Even at the moment it feels 50-50. The wicket will get a little bit more difficult as the game goes on.”