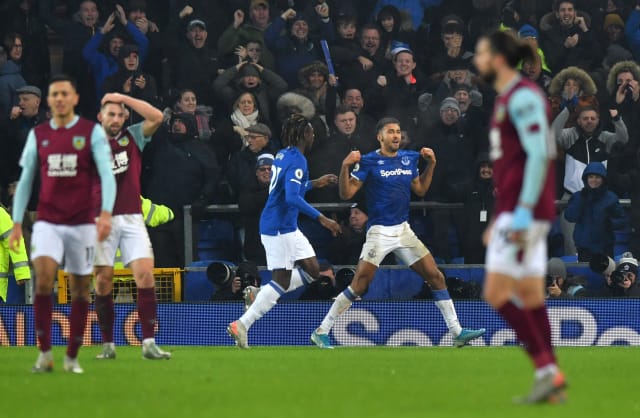 Dominic Calvert-Lewin got Carlo Ancelotti’s managerial reign off to a winning start as his diving header secured a 1-0 win over Burnley at Goodison Park.

The Toffees striker stretched Everton’s unbeaten run to four Premier League games but Ancelotti will be aware that this was not a vintage performance from his new side.

Everton once again struggled to make the most of their dominance of possession, highlighting the need for Ancelotti’s to bring in reinforcements up front, but prevailed from one predatory piece of finishing from the 22-year-old.

Fans flooded into the ground full of expectation of a new era under a world-renowned manager but it was soon evident there will be no quick fix to a squad assembled by former boss Marco Silva which is still a work in progress.

Caretaker boss Duncan Ferguson had claimed five points from his three Premier League matches against Chelsea, Manchester United and Arsenal to lift the Toffees into mid-table.

But the fire and energy witnessed under the former Blues striker was, as to be expected from a three-time Champions League-winning manager, replaced by a more cerebral approach.

It will take a while for Ancelotti to implement his methods and his instructions for his first game asked more of the players than had previously been required under Silva or Ferguson.

His decision to start the match with two right-backs, Djibril Sidibe pushing into midfield to allow Seamus Coleman to return, had everything to do with the fluid way the Italian wanted his side to operate.

Out of possession they were a pretty recognisable 4-4-2 but in possession Coleman tucked into a back three and Sidibe and Lucas Digne were pushed on, allowing the recalled Bernard to move inside from where he took on the mantle of Everton’s creator.

But their main failing in a first half where they enjoyed 75 per cent possession was a familiar one as they came up short in the final third.

Calvert-Lewin wasted two headers, Mason Holgate blasted straight at Nick Pope from close-range from Yerry Mina’s knockdown of Gylfi Sigurdsson’s free-kick while Sidibe’s cross-shot was blocked by the goalkeeper’s outstretched foot and, fortunately for Burnley, the rebound off Phil Bardsley bounced behind.

Despite Burnley’s lack of possession Chris Wood wasted the best chance of the half when he headed over Ashley Westwood’s free-kick.

After the break, Everton’s dominance was not as significant but Bernard continued to profit in the pocket in front of Burnley’s defence and early in the second half had a shot deflected behind by Ben Mee.

Robbie Brady headed wide at the other end but there was little quality on show and it appeared, with results from elsewhere going against them, Everton were destined to finish the day just two points above the relegation zone.

However, Calvert-Lewin’s intervention, after Burnley lost possession in their left-back area, put the Toffees within five points of seventh-placed Wolves and gave Ancelotti a winning start.