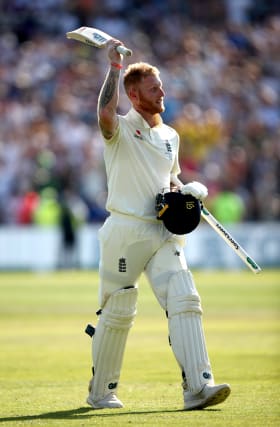 England need one more wicket to wrap up South Africa’s first-innings in the Boxing Day Test, before the spotlight turns on their tourists’ batting lineup and Ben Stokes’ role within it.

The Proteas finished day one on 277 for nine, Stuart Broad dismissing Kagiso Rabada with the last ball of the day.

Sam Curran was the pick of the bowlers, turning in career-best figures of four for 57 as his nagging left-arm swing propped up an otherwise careworn attack.

Broad and Jofra Archer have just recovered from week-long battles against a sickness bug that has ruled three players out of the game, while there were fears Stokes had joined the ranks of the ill after he required treatment for dehydration.

The all-rounder did not bowl a ball due to his symptoms and will be monitored by medical staff, raising questions over whether he will take his usual place at number five.

Curran thought he had completed his first ever five-wicket haul in Test cricket when he won an lbw decision against Keshav Maharaj late in the day. His celebrations were curtailed when a DRS review showed an inside edge before contact with the pad and he was unable to round out a fine display before stumps. With the new ball taken he may be behind Broad, Archer and James Anderson in the queue on Friday morning.

Rabada is, by anyone’s definition and on any pitch, a brilliant pace bowling talent. But at SuperSport Park he is an even more devastating prospect, where he has 28 wickets in five appearances. His already excellent career average of 22.50 drops to 17.89 at the venue and he will fancy topping up his tally this week.

Play on day one was delayed for a couple of minutes after an unusual injury concern. Rather than a member of either team it was a local photographer in need of treatment after tripping over the boundary rope and hitting his head. England’s players were quick to spot his predicament and summon medical assistance and the man was back at work before the lunch break.

Fears over the long-term viability of Test cricket are real but it would be easy to persuade yourself otherwise by looking over the massed grass banks of the Highveld. Boosted by a hefty travelling contingent, Cricket South Africa’s decision to keep the Christmas match in Centurion rather than returning to Durban was easily justified. A ground announcer declared himself surprised by the lack of volume from the Barmy Army but sales of beer and sunscreen surely made up for that.

By taking the field for his 150th cap James Anderson became the first specialist fast bowler to join an elite club that contains only eight other men and one other Englishman – Sir Alastair Cook. Anderson’s first captain Nasser Hussain was on hand to make the presentation.